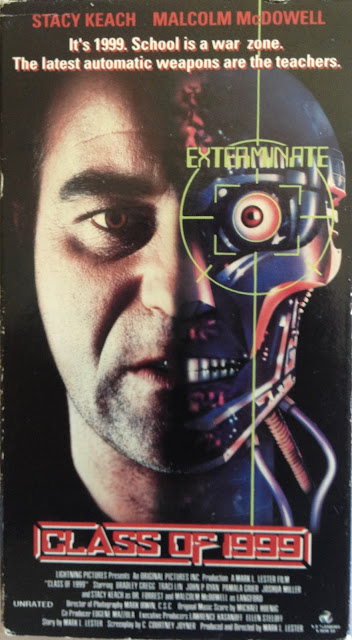 My friend Andy just gave up his left kidney to his brother Doug, and so he was home from work for a few weeks.  My way of taking care of him was bringing over Class of 1999, and I'm pretty sure it's gone a long way in helping him recover. So, this review comes along with Andy's drugged out impressions of the film as well as my own.

With Class of 1999, Mark L. Lester (Commando, Showdown in Little Tokyo) has crafted a very strange, seemingly impossible to market, teen action sci-fi dystopian future gang drug movie.  There are tons of huge explosions and a lot of fun moments.  If this type of film were made now, I think it would be more straightforward, PG-13 and have big teeny-bopper stars in it, ie: Robert Rodriguez' The Faculty.  Instead, what you get is a License to Drive, The Warriors meets Terminator world where the only adults are robots or teachers or both.

In the future, (the very distant 1999), gangs will run all inner-city schools in the states and every student will dress like they're in a Prince video.  It's gonna be sweet.  The neighborhoods surrounding the schools will become free-fire zones that no longer have police protection.  Malcolm McDowell will be a super-cool principal with a super-tall daughter.  Pam Grier will be a robot teacher who takes no shit from no one.

Cody Culp (poor-man's Stephen Dorff) gets out of prison and is determined to walk the straight and narrow, even though his brother (little dude from Near Dark) and best friend (poor-man's Billy Drago) are stoned out on some future drug called Edge.  Edge is like a vial cocaine-ecstacy.

Stacy Keach sports a greasy blonde rat-tail and weird albino eyes, as he leads a group of new android teachers trying to gain order.  They are designed to make decisions like whether to educate or discipline, and whether to use fight combination #1, #2 or karate moves.

Andy is pretty sure this is where the idea for "The Wire" Season 3 came from.  Makes sense.

Cody and the principal's daughter get curious, find out the teachers' secret and a chase scene between a Ford Taurus and a dirt-bike ensues.  The teachers end up in the drink and Cody shows his mad basketball skillz.  So, they implement war games and the little dude from Near Dark gets tossed.

Some of the students do wear jeggings, so, they got that right I guess.  (Andy's point)  The teachers' plan worked, as the gangs go up against one another while a Terminator ripoff song plays.  Lots of tossing, breaking of necks, shooting, grenades, etc...

Andy thinks Cody's duds (purple bandana under a baseball cap with a sport jacket that has frills) is also pretty accurate to how young people dress now.


Andy thinks it should've ended with a disgusting hardcore sex scene, as that seems to be the natural progression.

Totally sweet.  Mark L. Lester's films are all successful, in that they give you exactly what you're looking for. Stripped to the bone, they are generally, like this film, the extension to which you can take these genres.  This is no exception.  Class of 1999 is not polished and it's not well plotted out, but every moment of it is pretty damn fun.


Trivia:
The Goods:
The VHS is totally great, but there is also a DVD release from some random company.  The DVD artwork is absolutely horrible, however.