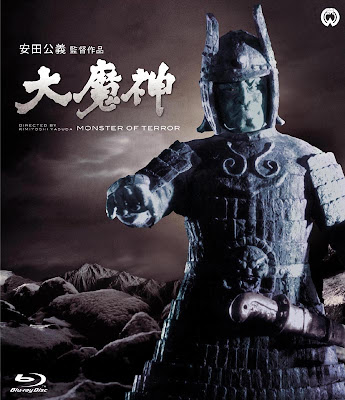 Daimajin is not your typical Kaiju film. If you are hoping to see a giant monster stomp through villages crushing people for 84 minutes you are going to be sorely, sorely disappointed. That being said, I loved it.  It was dark, beautiful, shocking, and at many times: truly frightening.

From the opening credits I thought this movie was spooky. It opens with thunder and lightning which fades into flames as the credits roll. All it needed was just a super creepy floating eye to cap it off and freak me out. Oh wait… It’s got that too. The actual movie opens on a mountain village, where a lovely Japanese family just put their baby to sleep and are hanging out when out of nowhere the earth rumbles. They suspect it is the work of the Maijin of the mountain. The baby screaming and the look of sheer terror on the parents’ faces actually made me tense up. They all run out of the house as the entire village gathers to pray to the Daimajin so that he may calm down. This short scene really stuck with me. When I started watching this movie I was not suspecting that it would have that horror element to it. While I understand why the original Gojira can be scary at times Kaiju films never struck me as being creepy. Even the sets were something out of a Hammer film. But this just set the tone of impending doom to all that go against the Daimajin.

We are quickly introduced to Lord Hanabusa, the Lord of the mountain village and his children, Kozasa and Tadafumi as they observe all of this commotion. In the meantime, Lord Hanabusa’s Chamberlain Samanosuke plansto murder the Hanabusas and take control over the land. He attacks killing the Lord but Kozasa and Tadafumi manage to escape with the help of a samurai named Kogenta and travel up to the mountain that is the home of Daimajin. They meet the local priestess, Shinobu and they are escorted up the forbidden mountain to live in the caves next to a statue of Daimajin. The film then transforms into a pretty decent Jidaigeki film. In case you don’t know what that is, Jidaigeki literally stands for “period dramas”. They are mostly set during the feudal era(Edo period) and usually focuses on samurai. Think Akira Kurosawa and you’ll know what I mean.

Ten years pass. The village is miserable. They have all been forced into some kind of slave labor by Samanosuke. Tadafumi turns 18 and finally decides that it is time that he tries to retake his rightful place asLord of the mountain village. If you’ve seen other Jidaigeki, you’d expect them to go out and maybe find 7 or 8 samurai to help them or maybe go strike a deal with a different Lord to help them and unite their lands or something to that effect but this is a KAIJU Jidaigeki. That shit does not happen in this film. Foolishness takes over and eventually both Tadafumi and Kogenta are captured and are to be executed publicly. The priestess, Shinobu, hears about this and goes to Samanosuke to plead for the lives of the two men. He listens to her begfor the lives of the two men and she warns him that he will bring the wrath of Daimajin upon him and his men, but he’s an asshole. He doesn’t give a shit about her or her mountain god. So what does he do? He gouges out her eyes with a hot poker and then strikes her down. With her dying breath she whispers that Daimajin will come for him. After hearing this he orders his men to travel upthe mountain and destroy the statue. On the way up the mountain, the men get lost but run into Kozasa and force her to show them where Daimajin is.

Now, up until this point the movie can be real hit or miss for people. It definitely has a strong opening scene and the ending which I will describe in detail later is spectacular but everything in the middle can be pretty slow if you don’t like or haven’t seen a lot of samurai movies. I very much enjoy samurai movies so I thought it was decent. Nothing to write home about but tolerable none the less. I do however feel that it completely necessary to have this slower paced middle section because it really makes the last twenty minutes that much more exciting and jarring. Without this type of middle story, the film would have just fallen flat in my opinion.

This is where things get really awesome. The men try to destroy the statue with large hammers unsuccessfully. The move on and try to hammer a large spike into his forehead. As soon as they get it in about halfway blood starts to drip from the wound and all hell breaks loose. The sky immediately turns black and gusts of wind blow the men over. Fearing for their lives, they run away. The earth then cracks open and swallows them whole as they scream for mercy. This scene is BRUTAL and 100% awesome. The lighting is otherworldly and the instant change in tone is jarring. It is a complete shift from the rest of the movie and it made me feel similar confusion and fear to what Samanosuke’s men must have been experiencing. It’s a fantastic scene and the build up to it felt right.

Afterwards, the sky clears and everything returns to normal like nothing had happened. Kozasa, fearing for the lives of her brother and herprotector pleads to Daimajin to help saves them and to stop the evil Samanosuke. She offers up her life in exchange for that but before she throws herself off a waterfall Daimajin awakens. The statue stands up and the maskover his face disappears to reveal a truly hideous and frightening face. I mean, Daimajin is freaky to me. First off, he’s not a giant. He’s maybe 20-25feet tall. He’s not going to tip of a skyscraper but the scale of Daimajin works. He doesn’t need to be as big as Godzilla but at the same time that is unnerving to me because of that fact. Secondly, I think he’s super freaky because you can see the actor under the costume’s real human eyeballs unlike Godzilla or any other major Kaiju monster. It’s the same feeling I get when I watch the original King Kong. You can see his eyes and you get more of a sense that he is real. Godzilla, Mothra, Gamara; they all are just creatures with lifeless eyes. He then heads down to the mountain village and immediately starts destroying everything in his path. He frees the two men and proceeds to hunt down Samanosuke. When he finds him, he holds him against a wall and then slowly pulls out the stake that has been bored into his skull and like the bad-ass he is, slams the stake into Samanosuke’s chest essentially nailing him to the wall. Again, BRUTAL AS FUCK. Daimajin, still not satisfied, turns on the people of the village and starts attacking them as well. It isn’t until Kozasa tries to sacrifice herself to save a child that daimajin stops. He looks at Kozasa and in an absolutely amazing show of special effects his spirit leaves the statue and the statue crumbles to dust. Seriously, this movie has jaw dropping special effects for the time that it came out in. I also really enjoyed the fact that the portrayal of Daimajin wasn't that of a savior but of a spirit. By that I mean he was capable of both good and evil. There is a cost to summoning a powerful spirit and when he starts attacking the villagers that worship him and awakened him, it is all so evident.

The music of the film was also top notch. Scored by Akira Ifukube, who also did the original Gojira and several of the sequels, it really added to the overall impending doom tone of the film. It had a sense of familiarity yet was different and darker. The final sequence when Daimajin awakens the score is big, bombastic and terrifying.

Daimajin is an outsider when it comes to Kaiju films. It’s not well known at all and I mean the monster doesn’t even appear until the last 20 minutes of the movie! It can be slow if you are not a fan of Jidaigeki but if you stick with it, it has a brutal, terrifying, and totally satisfying payoff. It has quickly shot up on my list of favorite Kaiju films and I feel like fans of this genre should give it the attention it deserves. It spawned two sequels which are also great in their own ways but the initial shock of the first movie just could not be replicated.

Set Yourself Up:
I’d watch it alone, at night and in the dark with the sound cranked. Get ready to get freaked out. Because of the slow pace of the film I would recommend some hot sake or a red wine. If you’re looking to eat during the movie then maybe some chicken teriyaki served on white rice.

The Goods:
The Mill Creek Blu-ray is GORGEOUS! The transfer that they did is spectacular. The set comes with the second and third movie. As for special features, they supplied the original trailers for each film then they have interviews done with the camera man for each of the movies. The interviews are really boring so I suggest skipping them.

- Tom Reinert is a horror / exploitation film geek extraordinaire in Minneapolis, MN and friend of the site
Posted by All-Star Video at 10:29 AM