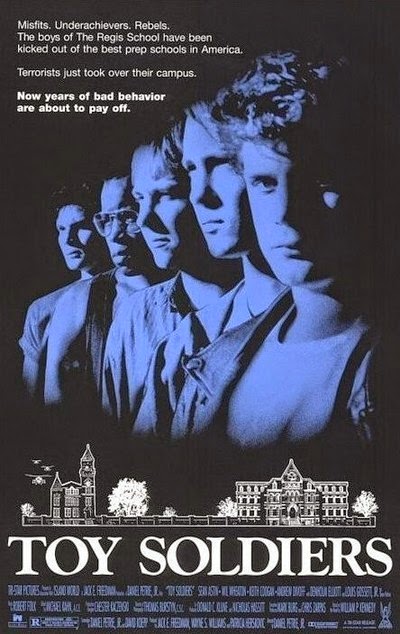 Toy Soldiers came out in 1991 with little to no acclaim. Roger Ebert gave it 1 out of 4 stars and it currently holds a 32% rotten rating on Rotten Tomatoes. That being said, Toy Soldiers totally kicks ass.

Toy Soldiers is about a group of misfit teens attending an all boy prep school who are suddenly taken hostage along with the rest of the student body and held for ransom in exchange for the release of a terrorist drug dealer. The main group of boys consists of Sean Austin (The leader of the group aka DAVE from Encino Man), Wil Wheaton, Keith Coogan (of Adventures in Babysitting and Don’t Tell Mom the Babysitter’s Dead fame [Hilarious that those are his two biggest films]), George Perez (of Carnosaur fame) and T.E. Russell (of Toy Soldiers fame). They call themselves The Rejects because every misfit group needs a cool name and it also coincides with the school’s name The Regis School for Boys. These boys are under the constant supervision of the Dean played by Louis Gossett Jr., who lays down the wisdom like a God damn boss. All the fun and games comes to an abrupt end when a terrorist group led by a whiny daddy’s boy takes over the school in hopes of freeing his father from federal custody using the sons of important and rich parents as ransom. What I find strange is that every hour the terrorists let the boys go outside and play everyday and they are shown having a good time during all of these scenes. They workout, throw a frisbee around, frolick, all while smiling and laughing even though they are fucking being held hostage by terrorists with machine guns and rocket launchers! Well, good for them for not letting that bother them in the least bit. The Rejects, however, are a little disturbed by all of this and work together to gather intel on their captors and come up with a plan to free everyone in the school.

This movie really feels like a sequel to The Goonies to me and it’s not just because Sean Astin is in both or the fact that the main bad guy looks a lot like one of the Fratelli brothers. I think it’s the fact that the depiction of these boys’ attitudes very much resonate the “Goonies never say die” mentality. Toy Soldiers has just a bit more at stake with the whole “terrorists with guns” thing happening but regardless, both sets of kids are willing to do what it takes to save the things that mean the most to them. Both films are adventures and both films involve the characters using their specific skill sets to overcome the obstacles ahead of them. I like the fact that the boys are depicted as intelligent and capable. These kids are able to handle themselves better than all of the adults in the film. Most of the adults are just bumbling fools with the exception of Gossett Jr.’s character who believes in the boys more than any adult could.

I think what sets this movie apart is the graphic depiction of violence. This flick pulls no punches in the graphic violence department. People get thrown out of helicopters, shot in the face, necks get slit and dudes get blown apart by machine guns. This movie would have been tough to market because who do you market to? The movie is about teens but you can’t market it to them since this movie is rated R and adults typically don’t want to go see a movie about a rag tag group of teens out smarting terrorists, I mean, that just sounds like a live action disney channel flick. I applaud the risk they took in making this movie they way that they did.

SPOILER ALERT! One thing that I always had a hard time with was the death of Wil Wheaton’s character 3 quarters of the way through. I remember wanting to watch it when  it came out because it had Wesley Crusher in it and by God I teared up when  he was shot dead in the film. I remember turning to my mom in shock muttering “they killed Wesley Crusher….” That has always stuck with me for whatever reason.


Teens who are depicted as capable and intelligent, tons of action and a lot of heart, this movie is worth your time despite Mr. Ebert’s criticism. At times, it’s very violent but it never went too far to where it detracts from the pacing of the film. A cross between The Goonies and Red Dawn, Toy Soldiers is a decent film that gets more crap than it really should. Check it out.