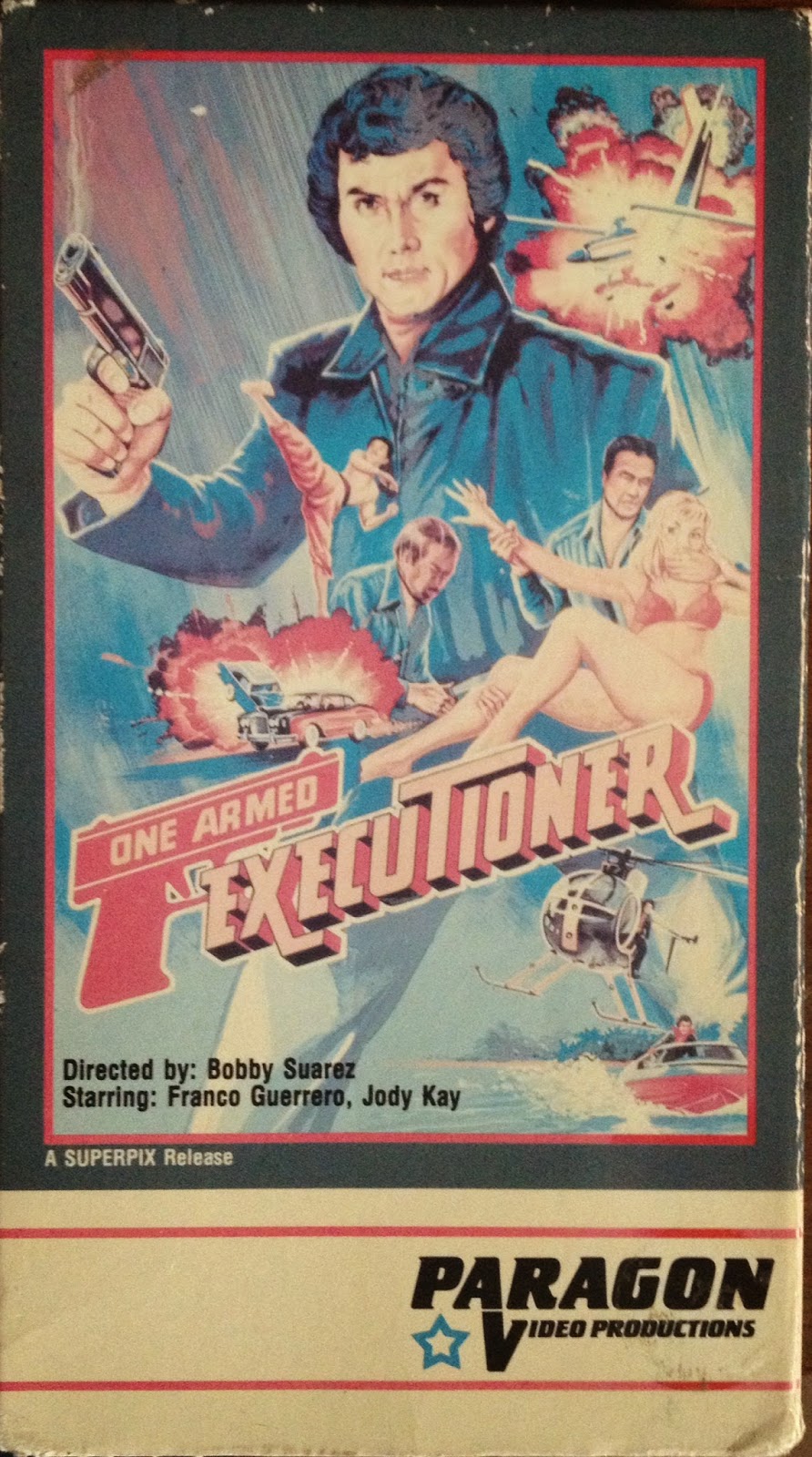 It should be stated first that this VHS starts with the most confusing trailer reel of all time.  There is a movie called Funeral Home that looks like complete nonsense, For Your Love Only with Natassja Kinski that looks miserably bad and then Fulci's Gates of Hell, which is insane and the editing looks like its about people who cry blood.  So, this sets you up for what is about to be a mind-boggling experience.

The One-Armed Executioner is about as stupid as films become.  Made in the Philippines on a budget of $27.00, it is mediocre on every level.  Really, this movie isn't very good, but I found certain elements so entertaining that I'm recommending it anyhow.

Here's what happens:
One guy talks in a phone booth, and another guy in a beard locks him in there.  Beardo then tips the booth over and throws it in the ocean.

Ortega (Franco Guerrero) is sent on a mission where he must chase a plane by jeep.  He manages to shoot the pilot and then blow up the plane.  Lots of men in jeans shoot machine guns at one another.

The Heavy is pretty upset that Ortega blew up that plane and killed his right-hand man, so he has men in masks kick him a lot.  Then one of the masked men runs a kitana through his wife's heart, and then cuts off his left arm, making him a ONE-ARMED EXECUTIONER!

The movie gets mega dull: Ortega gets sad for awhile, gets drunk a bit, wanders around the market and knocks stuff down.  Bad Jazz saxophone plays while Ortega talks to his dead wife.  He gets in a fight in the dark and you can't tell what's happening.  Apparently, they steal his money and make fun of his missing arm.  or something.  He gets kicked out of his favorite bar and some guy in a killer mustache kidnaps him.  He then has to "discover the world of darkness" because he has one arm.  He is told to "listen to sound.  Feel with your feet."

It gets good:
Then, it all changes when the bogus 70s disco comes in.  It gets awesome.  Ortega runs a lot, kicks stuff, shoots apples, the camera zooms in on things and the framing on the camera is always off.  Occasionally, there are glimpses of his left hand coming out from beneath his shirt.  It's great.


Revenge:
So, it takes too long to get to this point, but once it does, the fun level goes to 11.  Ortega chokes an old dude out, stabs a guy in the armpit, shoots a man off a roof, karate chops a man's throat, grenades some creeps, throws a machete through a man and blows up stuff all while "cool" piano music sucks and its too dark to really see anything.

He also has this conversation:
"How does it feel, Jason?"
"Not as good as sticking a sword in your wife"

In case the VHS cover wasn't enough for you I'll just say it: One-Armed Executioner is the type of movie that does some things right.  Women wear shower caps.  Once Ortega loses his arm, he always has a weird bulge in his shirt.  It's impossible to relay how funny the sounds are in this movie.  When Ortega wakes up and finds his arm missing, he makes the most inhuman sound I've ever heard.  I guess the closest thing I can think of is a mix of Prince making that whining sound and Nicholas Cage in The Wicker Man yelling about the bees.

The Tape:
The tape is good.  Paragon's art is beautiful on your shelf and you get those ridiculous trailers I mentioned before.  Oh, and you have to watch the trailer for the movie you're about to watch before you watch it = my favorite / least favorite thing ever.