AN OUTSIDER'S GUIDE TO THE FRIDAY THE 13th SERIES

There are few horror series or characters more iconic than Friday the 13th and Jason Voorhees.  The 1980s saw the culmination of all things slasher... And drove it into the ground.  Perhaps the "Friday" movies should be iconic for this as well.  Like other horror series, when it ran out of ideas it went to complete desperation, with the last film literally taking place in outer space. 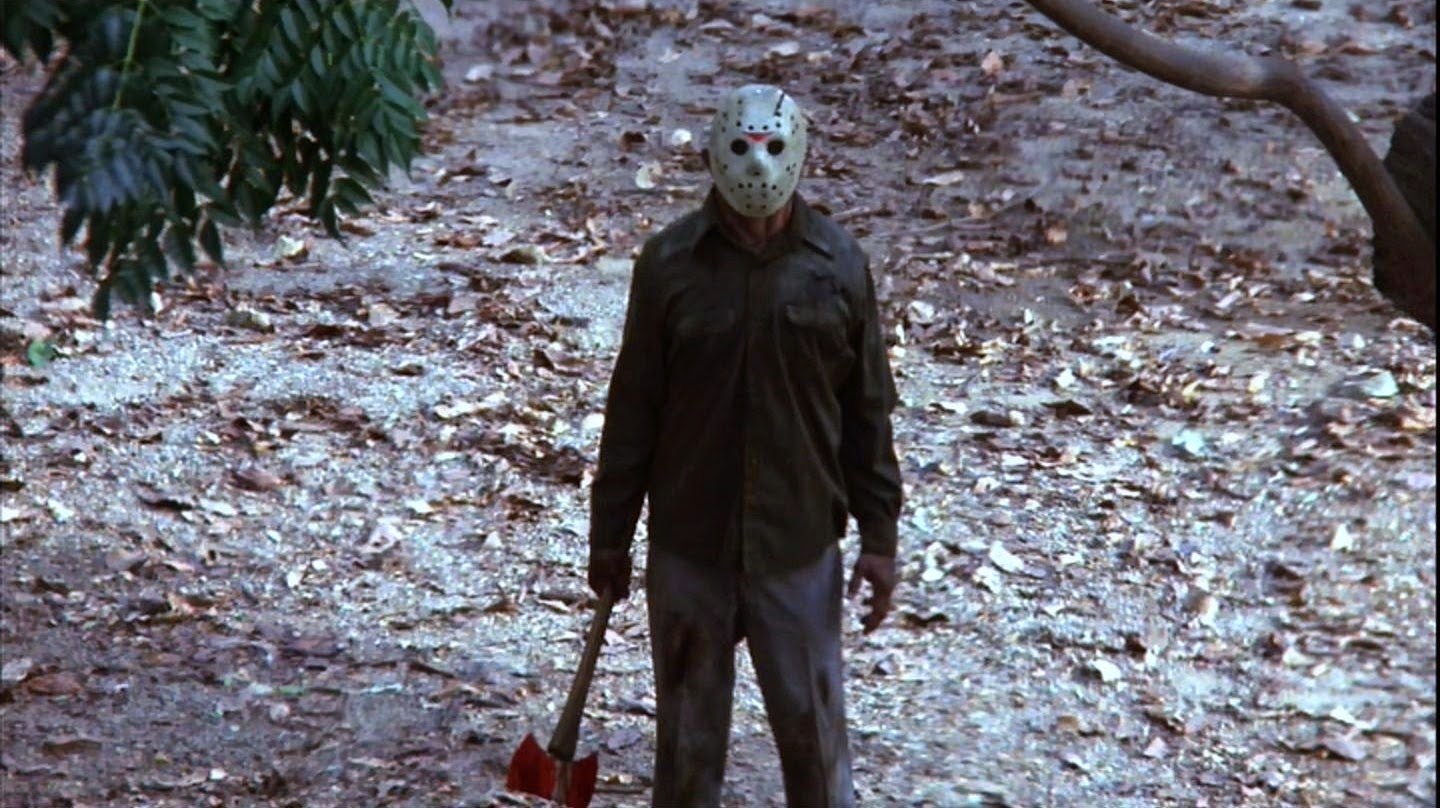 I'm a huge fan of horror films.  I love crap like Sledgehammer and I care deeply about Rosemary's Baby and Dawn of the Dead.  In the 300 or so movies I end up watching each year, I'll bet 100 are horror.

I realized a few months ago that I had never seen all the "Friday" movies.  Truthfully, I had never been super attracted to it.  I like the first film, and love the absurdity of Jason X, but had really only seen chunks of the eight films that lie between.  So, I set out to watch them all in order.  What I found was a giant mess of garbage with a few shining moments.  For the most part, they are all the same film.  When they finally do change it up, they become ironic and lose sight of why they were fun in the first place.

So, as someone who is new to the series I decided it was an opportunity to think of them as a whole.  (I am not including Freddy v. Jason or the remake.  Even though the remake features Jason shooting a bow & arrow at a water-skiing topless woman.).

*As a heads up, there are many spoilers for movies that are old below.

FRIDAY THE 13th (1980).  Directed by Sean S. Cunningham
Synopsis: "Attractive" Camp Counselors want to counsel campers.  Someone starts brutally murdering them.  That someone is the mother of Jason, a young boy who drowned in Camp Crystal Lake because camp counselors weren't paying attention.

Why it's Awesome:  Tom Savini.  The effects are wild and creative.  Savini was coming off his genius turn on Dawn of the Dead and with a bit of a bigger budget, the effects are fantastic.

Why it's Stupid:  The ending leaves room for a sequel.  Otherwise, this is pretty solid.

FRIDAY THE 13th PART II (1981).  Directed by Steve Miner.
Synopsis:  Jason's back!  Only this time its really Jason and not his elderly mother who would be physically incapable of the things that she does in the first film.  Jason wears a paper bag on his head and kills people.

Why it's Awesome:  Jason uses a spear.

Why it's Stupid:  Because it's a sequel to a movie where the killer has been killed.  Savini moved on to work on the great slasher, The Burning, and what we're left with is a movie that is pretty much the exact same as the original.

Why it's Awesome: Crossbow.

FRIDAY THE 13th: THE FINAL CHAPTER (1984).  Directed by Joseph Zito.
Synopsis: Jason is mortally wounded... or is he?  Corey Feldman.

Why it's Awesome:  Crispin Glover and Joseph Zito.  Crispin is hiliarious.  Zito is a madman, and this movie is insane because of it.  Baby Corey Feldman shaves his head and yells a lot.  And, there's this:


Why it's Stupid:  It's titled the FINAL CHAPTER, but there would be Six more films...  That's pretty stupid.

FRIDAY THE 13th: A NEW BEGINNING (1985).  Directed by Danny Steinmann.
Adult Corey Feldman (not played by Feldman) goes to an insane Camp for wackos and people start dying.

Why it's Awesome: Some dude uses an axe.  And, this killer dance scene:

Why it's stupid:  No Jason Voorhees.  That's right, no Jason.  That's pretty stupid.  Also, this movie is boring.

JASON LIVES: FRIDAY THE 13th PART VI (1986).  Directed by Tom McLoughlin.
Adult Feldman (not played by Feldman) feels upset that Jason messed up his life, killed all kinds of people and made him shave his head.  So, as anyone would do, he goes to Jason's grave, digs up the coffin, unearths the corpse and stabs it with a giant metal implement.  As it happens, this lightning rod gets hit by lightning, and kazowy! Jason is revived.

Why it's Awesome: It's totally insane.  Now that the series has officially jumped the shark (though I would argue it was Part II) they have the freedom to just go totally nuts.  Its great.


Why it's Stupid: Well, I guess the plot.  And the acting.  And the direction.  And the writing.  But, that's why this one is so fun.

FRIDAY THE 13th PART VII: THE NEW BLOOD (1988).  Directed by John Carl Buechler.
At the end of Jason Lives, Adult Feldman chained Jason to the bottom of a lake and ran into his brain with a boat propeller.  So, Jason is underwater.  Lucky for him, and us, there is a psychic who can re-energize his body and bring him back to life.

Why it's Awesome:  By this point they've resorted to psychic powers.  That scene with the sleeping bag.  So much.


Why it's Stupid: By this point they've resorted to psychic powers.

JASON TAKES MANHATTAN (1989).  Directed by Rob Hedden.
Teens gettin' wild in a boat on their Senior Trip to Manhattan.  Jason somehow gets tangled in an electrical wire that is conveniently located underwater and is revived.  Jason gets wild in a boat.

Why it's Awesome: Hmm....  That's tough.  There's not much here to like.  Once everything's gone haywire with a series, it doesn't really help to just change location.  Everything else stays the same and there are no likeable characters whatsoever.


Why it's Stupid:  He's revived AGAIN by accidental electrocution.  Then he goes to Manhattan.

JASON GOES TO HELL: THE FINAL FRIDAY (1993).  Directed by Adam Marcus.
Thirteen years after the original, they finally try something completely different.  The film opens with a woman who undresses to take a shower, and when Jason attacks, she runs into the forest with a towel on.  But, she's more adept than most and leads Jason into a trap, where the military proceeds to blow him to pieces.  From there, they take him in pieces to the morgue.  The coroner, Richard Grant, eats his heart and goes all wonky.  We found out from there why Jason is immortal.  There is a magic knife and some other dumb crap.

Why it's Awesome:  Technically, this film is extremely sound.  It looks good, it moves well, etc...

Why it's Stupid: They make Jason out to being possessed by an evil slug, which contains some stupid evil that transfers from person to person and can only be reborn through a Voorhees.  I feel dumb for even writing that.

JASON X (2001).  Directed by James Isaac.
Scientists are on the problem, and they've discovered they can't kill Jason, so why not freeze him?  Unfortunately, he gets thawed out in a.d.2455 and space people in the future use laser guns to not kill him.

Why it's Awesome:  It's Jason in space!  That is so ridiculous!  Lucky for us, at one point a scientist has a sink full of liquid nitrogen...

Why it's Stupid:  It looks absolutely horrible.  The budget seems akin to crap on the SyFy Channel.  And, it's Jason in space.