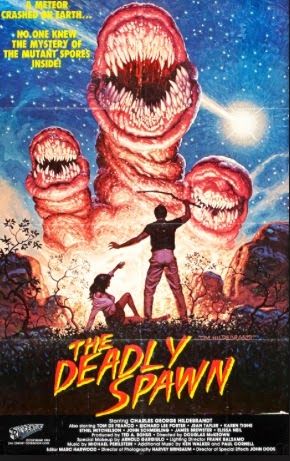 It gets no better than low budget monster movies where a lady gets her face bit off in a dingy basement, a girl gets decapitated and tossed out a window, blood sprays awkwardly on light-bulbs, and science geeks make-out. Thus, the reason for THE DEADLY SPAWN being spectacularly awesome.

The Set-up:
So, some sweet dudes are camping when a "red hot" meteorite crashes near them.  They then get dominated by a creature from the shadows.  Next up, an older couple wants to get going on a trip, but they need to check the hot water heater first.  Dude goes down to the basement: dominated.  Before-mentioned lady goes down to the basement: dominated by getting her face bit off.

From there, we get introduced to a semi-sweet old couple, a ten year old (Charles) who is obsessed with monster movies, his brother (Pete) the science major, a grumpy cat "who is crazy," and two more college science nerds.

An element that manages to work extremely well in the film is the weather and temperature.  A large thunderstorm is making its way through, and it permeates every outdoor shot.  The sound of rain and thunder are constantly in the background.  Lighting fires and bundling up provide a real sense of how cold it is.  There is also the sound of dripping water through the basement and on the outside.  The film "feels" cold and wet.  (Though it was actually shot during one of New Jersey's longest droughts) And, that, in a way, is far more affecting than any monster effects.

But on the topic of monster effects, they are awesome.  This is especially true when you think of the time it was made.  There were no books or websites to help you figure out which materials should be used or ways to make it.  Grotesque little slugs scurry in the water, lit only by a flashlight, attacks are seen in shadow and there is a certain mystery to the creature, until we get about a half-hour in.  After that, Charles finds the monster and her victims in the basement, and the jig is up.  We get to see it all.  He's basically a worm with three heads, arms, and a shit ton of teeth.

And then, the most amazing scene I've seen in a movie for a long time: the old lady lunch scene.  We all know how old ladies loved to get together in 1983 to gossip, share recipes and enjoy one another's company.  Well, think of how awesome that is once you include killer slugs.

Filmed mostly in Gladstone, New Jersey for basically nothing, this impressive and super fun film is everything that I love about super low-budget monster films.  The gore is hilarious, the monster design is super inventive, the ambience is effective, and the acting is... adequate.  The effects are super ambitious and awesome.  So, most highly recommended.

The Release:
The film looks great on the blu-ray release, but I'm going to recommend the DVD Special Edition release that was put out by Synapse.  What Elite has done is take a lot of the special features and transfer that Synapse put together and just re-release it as a Blu-Ray.  They've added one audio commentary.  Pretty shady.