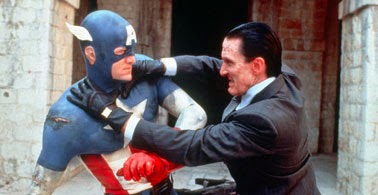 The movie starts out in 1936 fascist Italy, when a young boy is forced to watch his whole family get brutally gunned down by Italian soldiers. He is then brought to a secret laboratory for experimentation in order to create a super soldier. Now, let’s pause for a moment to reflect on this sequence. Even though this movie is rated PG-13, it was obviously intended for kids/young teens. Why in the hell would you start your movie out in fascist Italy in the Thirties? With a kid watching his entire family brutally murdered?? AND THEN getting experimented on by evil scientists??? It’s like the filmmakers thought they were making the Schindler’s List of superhero movies. The saving grace of this scene is the stop motion skinless rat. It’s pretty great. So, the kid ends up becoming the Red Skull. During this process, one of the scientists has a change of heart and she escapes to America. Years later, World War II starts up and the government needs a hero. With the help of the former fascist Italian lady scientist, the super soldier program is started and they find the perfect candidate in gimpy Steve Rogers. Most depictions of Steve Rogers pre-Captain America has him being small, skinny and weak. This movie has him walk kinda funny.

He obviously goes through the super soldier process and just as everyone starts congratulating each other, a Nazi spy disguised as a “Special Observer” shoots and kills the Italian science lady in the greatest “PSYCHE! I’m totally a Nazi, dickweeds!” sequence in all of film.


It’s from this point on, the movie becomes an Adam West 60s Batman schlockfest. Cap makes his way to the Red Skull’s castle hideout only to get his ass handed to him and then is strapped to a giant missile and fired off at the White House. Well, Cap kicks the shit out of the missile and sends it off course to the frozen wasteland known as Canada. He gets frozen for a couple of decades and somehow wakes up at the same time the Red Skull plans on kidnapping the President. It’s not the greatest story but its mostly faithful to the source material. I say “mostly” because why the HELL is the Red Skull Italian? He’s always been German in every depiction of the character. There is no reason for him to NOT be German. I just have no clue why the filmmakers would make the bad guys Italian when it would be so easy to make them Nazis.

My favorite part of the movie is Captain America’s secret weapon. No, it’s not his shield throw. It’s him feigning sick then stealing a car. He does this twice in the movie. The first time I thought it was funny. The second, I thought it was hilarious! His whole trick is the pretend to feel sick, insisting the driver to pull over. He walks like 10 feet away and when the driver goes to check on him he runs back to the car and peels outs. Captain America, the symbol of everything great about America, stealing cars. Symbolism.

The crazy thing about this movie was that it actually has recognizable actors in it: Darren McGavin (Kolchak, The Old Man from A Christmas Story), Michael Nouri (Flashdance, The Hidden), Ned Beatty (of Ned Beatty fame), Ronny Cox (Total Recall, Robocop, Beverly Hills Cop). Oh yeah, AND they got Matt Salinger. You know: Matt Salinger. The actor. Never heard of him? Well, you’ve heard of his dad, J.D. Salinger, author of Catcher in the Rye. Matt got his first break in Revenge of the Nerds and this was supposed to be his big break. Unfortunately, despite a bunch of press and a big ad campaign, Captain America was shelved for 2 years and quietly released on VHS in 1992 thus putting Matt’s career on ice (see what I did there? Captain America humor!)

This movie isn’t bad if you embrace the shlocky-ness. They had a decent enough budget and the movie was evenly paced. It was directed by Albert Pyun who also made Cyborg, Vicious Lips, Kickboxer 2, 4 and the upcoming Kickboxer 6; all pretty entertaining movies. Captain America is on par with the other superhero movies of the time and much like those films, it just doesn’t stand the test of time. If you can embrace the cheezy-ness of the movie then it can be fun.

Oh! And in case you were wondering, Captain America: The Winter Soldier is kick-ass. Go see that after watching this one.