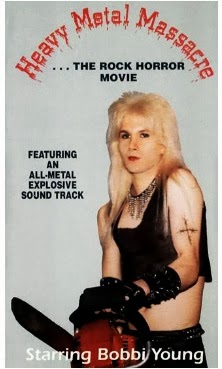 Raging guitar rock from the late 1980s, giant bangs, hilariously slow pans and inaudible dialogue are just a few of the things that I love about this movie.

The Rock and Roll Lifestyle is tough, you know.  The hair is complicated, the mustaches are smelly and murder is ALWAYS pinned on you.  That's why Rico accidentally runs into the camera when he's getting pulled away by the cops.  It's also why strobe-light shots of black-light posters are on-screen every ten minutes.

Bobbi Young is so tough that he can just simply stare at the camera and make it go out of focus.  His "huge" house is a den of iniquity.  Drugs, screaming metal, chain link-fences, random pallets and abandoned cars are just some of the great stuff he's got.

Then, Bobbi gets all creepy, handcuffs a prostitute to a pallet, and then sledge-hammers her belly until a tiny bit of blood is dripped on the ground.  Damn.  And, I was just starting to like Bobbi.

Luckily two whack detectives are sitting in a guy's basement that is a stand-in for the police station, working on cracking the case. They hit Rico ("The Shithead Scumbag") but are convinced he's not their main.

Slow-motion green sepia-toned Bobbi gets some money for cocaine, and a bag is relayed and oh who cares.  I can't tell what's happening and it doesn't matter.  The interactions amongst actors is wonderful.  Bobbi Young is perhaps the Robert DeNiro of the SOV world.  Every line he delivers is gold.  The filmmaking has that unmistakeable SOV quality that you'll only find within the Nick Millard, Wally Koz crowd.  And, it has metal soundtrack, which I'm convinced can make any movie great.  Where a film like Death Nurse is perhaps 30% padding, I'm gonna go ahead and say this movie matches or even tops that.  Its' nearly perfect.

There is something very special about this film.  It is obviously filmed completely within the confines of the rock scene in Rhode Island.  It has all the trappings of Rocktober Blood or Rock N' Roll Nightmare, but none of the polish.  So, instead, you get some type of home-made nightmare metal fan film.  Kaleidoscope shots, negative color and other thirty second shots of a stuffed owl's eyes are just a few of the things you have to look forward to.  Perhaps one of the least professional or ambitious of the SOVs I've seen, it stands out for the pure disaster that it is.  And, there is not a dull moment.  Bravo, Defalco, Defalco and Ottaviano.

The Goods:
This is a hard one to come by.  You won't find it on Amazon or Ebay very often, and if it does show up, it's crazy expensive.  I found a guy on iOffer.com who had done a bootleg.  He did a nice job with the art (It's the VHS art, all blown up and stretched).  The quality of the transfer is bad, but I can only imagine that it probably looks about as good as the original.  Well worth your money.