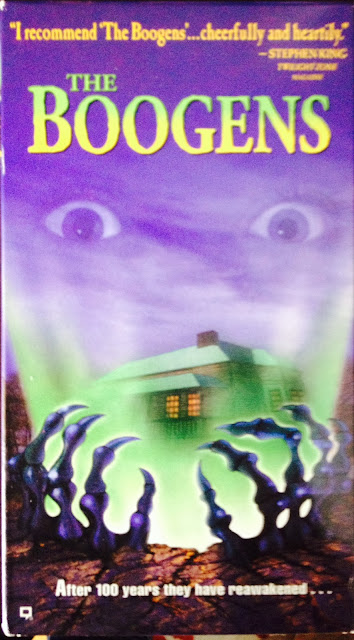 The set-up is nothing really all that special.  A long-abandoned mine is being reopened by speculators and two friends, Mark and Roger, are there to work.  Roger's girlfriend Jessica and her friend Trish come up from Denver to visit.  There are Boogens.  The Boogens are dangerous.

And, mostly, I was attached to the dog, Tiger.  Tiger is maybe the best actor in dog history.  He awkwardly looks back and forth, has perfect comedic timing and could really use a bath by the end.

The first hour of the film feels as though you're watching any old '80s comedy.  Young, likeable people up to young people hijinx.  It's all capable enough that the film could've succeeded just fine as a Say Anything or Fast Times at Ridgemont High.  The characters are wholesome in that early '80s kind of way.

Then, it turns dark.

Once the monsters come out, it proves to also be capable as a monster stalker movie, complete with Boogens POV and great Boogens make-up and effects.  Because this is pre- John Carpenter's The Thing, I think it deserves some recognition for the creative monster design.  I won't describe it here, but on the small budget, they are pretty successful at not showing the Boogens until absolutely necessary, and then obscuring them in the darkness.

And, so, it works on both levels.  But, maybe that's it's problem.  The Boogens never really found an audience with the slasher crowd or the monster crowd or the teen comedy crowd.  The crossing of genres always seems to leave crowds behind.  It's a film that is not built from the beginning to make you guess who dies first or who lives.  It's not the type of film that makes you look for the next creative kill.  I downright felt bad when I realized certain characters were about to meet their end.

The Marketing:
It's bad.  Really bad.  The cover has some skeleton hands reaching out and some weird ghost eyes hovering above an old cabin.  Released the same year as My Bloody Valentine, this film failed to make even close to the amount of money Bloody did.  And yet, it's a far better film.  I think the first culprit is that title, The Boogens?  What's a Boogen?  I was watching this with Tom, and he pointed out that a much better title would've been Black Friday (how the townies refer to the original mine collapse.)  I agree completely.  Also, the tagline he came up for it was, "Boogens will be Boogens."  Brilliant.  Why isn't Tom in marketing?  Also, the poster art and box cover should have something with creepy tentacles, cute co-eds, and a mine shaft.  Not some weird skeleton hands and some disembodied eyes.

Before you open the mine shaft:


Apparently this was recently released on Blu-ray, so check that out, if you want.  Maybe the remastering is great, which would help this film, as the darkly lit parts on the VHS are very hard to make out.  But, either way, its an enjoyable experience.