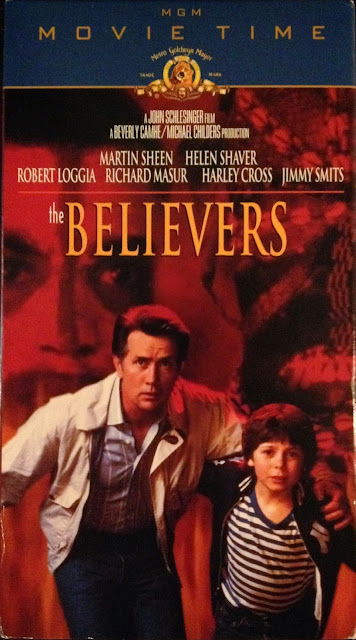 Before President Bartlett (the incomparable Martin Sheen) was President Bartlett, he was a psychiatrist in wonderful Minneapolis who loved to race the milk man home.  Anyway, he gets home, jokes around with his creepy son who is playing with a weird doll and then accidentally electrocutes his wife by spilling milk on the ground.  Thus starts Bartlett's rise to become the leader of the free world.

Director John Schlesinger has made some incredible films, Marathon Man being my favorite.  His films have a great capacity to capture the strange huge-ness that is New York City.  Central Park seems to have a special significance for him.  It's as if the wildness in the midst of that giant smoggy grid represents something deep in the subconscious of the city.  Case in point, the amazing ending to the aforementioned Marathon Man.

President Bartlett ends up being a psychiatrist for the NYPD.  Matthew Santos (national treasure Jimmy Smits) wants to run for president some day, but unfortunately he doesn't know that yet, so he is just a great detective that cracks up on a case.  Bartlett comes in to treat him and is dragged into the world of cult ritualism, an off-shoot of Santeria.

Similar to something like The Serpent and The Rainbow, it plays off of American fears of our ignorance of and separation from the "old" spirit world.  Here, it is how their religion targets and sacrifices young boys.  Bartlett sees it all as superstitious nonsense, but spells, rituals, magic and the fact that they hope to sacrifice his child bring him to the brink of madness.  Soon, he has no idea who he can trust, and things get very interesting.

Evaluation:
What elevates this film from typical horror schlock of the late 1980s, outside of the amazing performances, are the settings and pacing.  One crime scene in particular takes place in a beautiful and decaying old cinema palace.  The lighting, grime, and cobwebs perfectly capture a certain humid and dank nightmare.  The slow and plodding pace gives the film room to grow and breathe, creating a deep connection to the characters and story.

There is some strange voodoo racism going on that I think would only be acceptable twenty-five years ago.  Cliched dancing, drumming, etc...  I'm sure there is some truth to the ritualistic nature of it, but I would hope it could be portrayed differently.  Those are also the only scenes that don't work well at all within the film.  But, then, the film changes tone and it all fits together very well.

Smits and Sheen are perfect, the twists are fun, and it ends perfectly.  This is a wonderful little gem that I am surprised doesn't have a bigger following.

Before you become a believer: