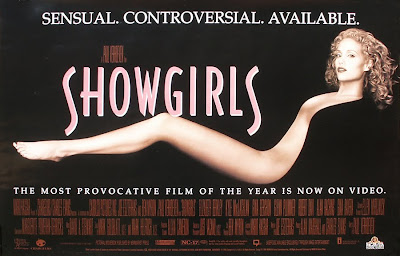 Everyone remembers where they were the first time they heard about Showgirls. Well, At least if you were a Saved By The Bell Fan. The curiosity of seeing our A.C. Slater’s girlfriend naked drove me mad in 1995. Then I finally saw it all during a free preview weekend of Cinemax (probably around 1997). If you have yet to experience Showgirls, let me tell you, it is extremely sexually confusing for an 13 year old boy to see. It isn’t any less confusing for a 28 year old.

There is so much nudity. It’s not arousing. It isn’t even exciting. Even as an pervy little boy I knew something was amiss. During my most recent viewing I think I discovered a few reasons why this movie may have left me sexually scarred for life.

The film centers on Nomi (Know me) Malone (I'm alone). For some reason, everyone is drawn to her even though she’s a violent, french fry throwing, wench. The film opens with her hitching a ride to Las Vegas with the dream of becoming a dancer. Nomi’s ride (his name is Jeff, but it really doesn’t matter) ends up stealing her suitcase and stranding her. During her vomitous fit of rage over this petty theft, she meets Molly. Her de facto roommate and best friend. They proceed to talk about chips and clothes during all of their scenes together.

They go on to meet people that you think will matter during the course of the film (such as art dancer James). But really, all they are doing is adding about 30 hilarious minutes to the movie.

Then there’s Cristal, the star of the show GODDESS, which Nomi ends up being in. The relationship she has with Nomi is apparently Director Paul Verhoven’s homage to ALL ABOUT EVE. . . I haven’t see ALL ABOUT EVE in 10 years. . . But I recall ALL ABOUT EVE being clever and conversations did not revolve around breasts and I don’t recall any acts of toasting with tortilla chips either.

Then there’s Zach (played by Kyle “I shouldn’t have done this” McLachlan). He runs the Stardust Casino, when GODDESS is featured. He’s involved with Cristal. So of course Nomi “seduces” him. And by “seduce” I mean “have the most violent water sex the earth has ever seen” or “Grand mal seizure on a meat pole” Seriously, the sex scenes in this movie will have you feeling like you have to call a chiropractor. The flailing is unlike anything I have ever seen..

Long story short Nomi get’s Cristal’s spot in the show. See’s how people at the top are even “whores” and that nothing changes. Molly, the only remotely decent person in the movie is raped by a gang led by Michael Bolton (AKA Andrew Carver). Nomi seeks revenge by pretending to be a call girl to get close to him and then ninja kicks Carver (Bolton) into the mid 90’s neo-roman white marble floor (a subplot that really doesn’t work). This pretty much ends the movie. Nomi leaves Vegas. Of course she is picked up by the same guy that brought her there, you know, Jeff. What an amazing turn of events. . .

Elizabeth Berekley’s performance really makes this movie a gem. She plays this role with a faux violent rage that makes you question her sanity. It’s almost as if Director Paul Verhoeven told her to constantly act like she did in the episode of Save By The Bell when she OD’d on caffeine pills. She vomits. She kicks. She conquers. Everyone knows that she took on this role to separate herself from SAVED BY THE BELL. I’m pretty sure there has never been a more aggressive attempt to prevent type casting in the history of the screen. I’m also sure there had never been such a violent backlash.

The portrayal of females in this movie is appalling. However, that’s really what makes it notable. Writer Joe Eszterhas (responsible for such gems as Basic Instinct and Nowhere to Run) and Verhoven (also responsible for Basic Instinct, but more importantly, Robocop and the ORIGINAL Total Recall) must have never had any sort of meaningful relationships with women. To suggest that women only talk about fingernails, breasts, being naked, chips, and shopping isn't only insulting to 51% of the population, it destroys the audience’s ability to care about these people. . . or find them remotely attractive. Not to mention they are constantly nude. which makes them all the less desirable.

The men on the on the other hand are all completely wretched, scheming bastards. Tony Moss, the Director of  GODDESS only serves to further insult women. Phil (some other dude involved with the hotel) whores out his dancers to Thai tourists at boat shows.  I can’t help but feel the portrayal of men is a better representation of reality.

Paul Verhoeven has never been a subtle director and Joe Eszterhas has never written a masterpiece. Both of these guys are carrying on a tradition of over the top, scandalous filmmaking. Had the budget been much lower it could almost be mistaken as a  “grindhouse” style exploitation flick 10 years before Quentin Tarantino and Robert Rodriguez made it chic.

If you view this movie expecting it to be absolutely awful, you will most likely have a great time watching it. If you watch it expecting a gritty, Scorsese-esque portrait of Las Vegas (as Verhoeven apparently originally intended) you will spew obscenities at the screen. If you watch it for the sexual content upon which it was marketed, you will suffer psychological damage. It’s a goddamn mess. When viewed from the proper vantage point, it’s a hell of a lot of cheesy fun.

In closing anyone that beat off to this is an absolute sociopath.

A bit of the "Digital Bra and Swear Dub" Version the aired on VH1. I truly wish this was on the DVD.

Kyle McLachlan. He’s been in some great stuff (The Hidden, Blue Velvet, Twin Peaks). Why Showgirls?

Joe Eszterhas was paid 2 million dollars for the script.

"Showgirls enjoyed huge success in the U.S. home video market, generating more the $100 million from video rentals and became one of MGM's top 20 bestsellers of all time." - IMDB.com

The dude that played Coach Tugnut on Even Stevens as a Strip Club Patron.

The scene with James and Nomi dancing in his house (or tool shed). It’s so gross you have to see it for yourself.

AUDIO COMMENTARY featuring David Schmader. Schmader is (or was at least when this was released) a Seattle based writer. He screened the movie and offered live commentary during screening. MGM caught wind of his fandom and offered him the commentary gig. The commentary is pretty good. He offers up select tidbits and does overtalk or punch you with constant factoids. He lets the film unfold and guides you through it. Many times he let’s out moans and groans to signify the best horrible parts of the movie. He mostly hammers home the idea that this film is the culmination of everyone involved making extremely poor decisions with their lives.

I would have liked to hear a Verhoeven and/or Eszterhas commentary, but as Schmader explains during the commentary, Verhoeven is not proud of this movie and it turned out badly in his eyes.

There is also a “Lap Dance Tutorial” with real life strippers and a brief video commentary that runs during the film (should you choose to press ‘enter’ on your remote when prompted). The best part about the involvement of the strippers is that they more or less call bullcrap on everything stripping related. No men in the dressing room. No lesbian kissing on stage. No grinding during lapdances. Hearing the authenticity of the stripping scenes dashed just goes to show that Verhoeven did no research on how these women actually live and work. He made the film as salacious as possible and didn’t look back.

Admittedly, I did not view this feature. I don’t want this movie spoiled by too many facts. I just want to know that it is the most enjoyable movie mess of all time. 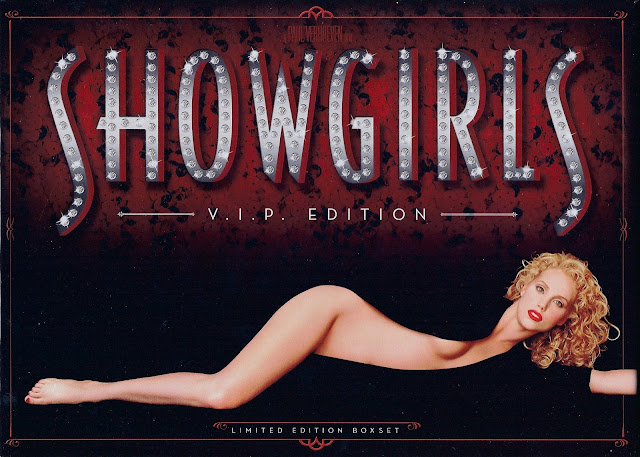 The DVD comes in a large glossy panoramic box. The front features Elizabeth Berkley lying across the entire length of the box. She is, of course, about as naked as someone can be on a movie box in this day and age.

The sides of the box are printed red sequins. Very classy, yet tacky. Speaks volumes of the film itself.

This edition includes a whole bunch of extra crap.

Sadly, they just have a printed logo on them. No pictures from the film. Just a silhouette of some strippers and the text “Showgirls.”

It’s pin the tail on the donkey. Of course, instead of a tail you get suction cups with tassels on them. I bet you a pile of giant bacon cheeseburger vomit no one have ever played this. The photo you “pin the pasties” on is a poster sized, super glossy photo of a topless Jessie Spano covered in 1996 era body glitter. It also includes a cheaply made paper and elastic blindfold. Of course it’s adorned with that same silly Showgirls logo as seen on the shot glasses.

Missed opportunity here. I thought these would be nudie playing cards (you know, the kind your Dad and Uncle used to bust out after you went to bed). I’m not sure who thought it was a good idea to include a basic set of playing cards with the same logo as the shot glass on them. Whoever that person is, is a huge dummy. Seriously, what a butthead

The last perk here is a set of glossy photos. 4 are stills of Elizabeth Berkley from the film. 2 look to be press-kit photos of her, and one of. . .  guess what? . . . the same cheesy “Showgirls” logo plastered all over the other stuff.

On the reverse of 5 of these nicely glossed stills are drinking games. I don’t care to detail the games themselves, but I must discuss the fact the each and everyone states to use “NON-ALCOHOLIC” beverages to play the games. The reverse of the logo card is a disclaimer about how MGM Home Entertainment does not condone the abuse of alcoholic beverages.
The final card has a few fun facts about the film. . . most of which are not fun and are obvious tidbits about how the sex in the film is simulated and not real. . . well duh.

“A one of a kind experience . . . You won’t be disappointed.” - The Washington Post

Overall, this set symbolizes MGM finally understanding what SHOWGIRLS is. A mess in the eyes of many. A triumph in the eyes of few.
Posted by All-Star Video at 5:41 AM