Box Art: THE GATES OF HELL 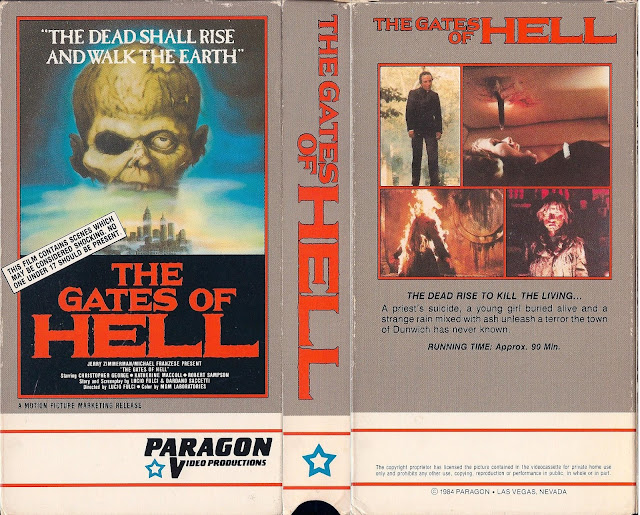 We get a poster shot for the movie as an inlay on the Paragon Video Productions template. This isn't an artistic statement by any means. Paragon didn't go out of their way to present the movie in any special way. But it works. Looking at this box in 2012, it looks classic. Back when it was on a video store shelf, not so much. It isn't even a clamshell or big box, just a standard slipcase.

The poster is pretty cool. Giant crusty zombie head floating over a foggy city. It certainly displays director Lucio Fulci's dark and eerie style. It is subtle in comparison to some other box art, but it works.

Of course we get the white warning on the cover. These we commonplace for videos in the 1980s. This one doesn't claim  "THIS FILM WAS BANNED IN 27 COUNTRIES" or anything of that nature. Unlike most films that boast a ban warning, THE GATES OF HELL actually was banned or severely cut in Germany and the United Kingdom at various points in time. You'd figure Paragon would try to play up the bans.

The tagline seems like a tweak on DAWN OF THE DEAD's tagline. I'll get into that later.

On the back we are treated to four fairly tame yet, chilling screen shots from the film. These are certainly some of the more memorable images from the movie. That tells me is that Paragon actually watched the movie before releasing it. Which is good since I'm not sure all distribution companies did that back then.

The synopsis is about as much plot detail as anyone could ascertain.

Director Lucio Fulci is a wonderful horror filmmaker. THE GATES OF HELL, in my opinion, is the weakest of his pictures that I have seen. While his signature dark atmosphere and brutal gore effects are in play, as a narrative, THE GATES OF HELL makes no sense.

There's a psychic girl, some guy that hangs out with her, a kid, people that burst into flames, a priest that hangs himself, and some teleporting zombies. I honestly can't tell the purpose anyone serves or what's going on. Maybe that's the point?

I can tell you a dude gets dominated by a huge drill. Oh yeah, and a lady barfs up her own guts. It's gory. Real gory.

WHAT'S IN A NAME:

Released in Europe in 1980, THE GATES OF HELL was released theatrically in the United States in 1983. Initially it was known as TWILIGHT OF THE DEAD. United Film Distribution Company (The distributors of George A. Romero's DAWN OF THE DEAD) filed a cease and desist claim on Motion Picture Marketing (The distributors of THE GATES OF HELL). Strangely, the main theme sounds very much like the main theme of DAWN OF THE DEAD. It may be different in subsequent releases, but it sounds like the DAWN theme on this tape.

THE GATES OF HELL is currently available under the title CITY OF THE LIVING DEAD. I'm unsure as to why the name has been changed (or why it's called something else in nearly every country it has been released in). CITY OF THE LIVING DEAD is certainly a more suitable title for what occurs in the movie. Regardless, this movie is worth watching. If you can handle a bunch of nonsense, the effects and atmosphere are worth checking out.
Posted by All-Star Video at 12:42 PM