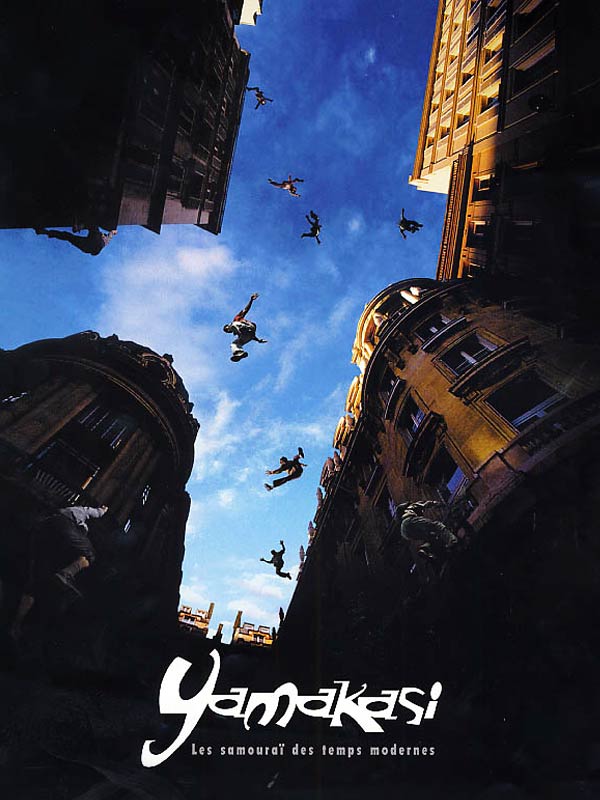 Parkour (or freerunning) seems to be everywhere nowadays. In movies like Brick Mansions, Casino Royale and The Bourne Legacy. There are references in shows like The New Girl and The Office. It’s become a full video game mechanic in games like Assassin’s Creed and Mirror’s Edge. However, not many people know that it was started in France by a group called Yamakasi which comes from the Lingala language and can mean “strong body”, “strong mind” or “strong person”. David Belle (of District B13/Brick Mansions fame) created parkour in the late eighties and further developed it with 8 of his friends. It never broke into popular culture until Luc Besson’s scribed Taxi 2 (which unfortunately was never released in America) in 1998. Besson (La Femme Nikita, Leon: The Professional and The Fifth Element) was so very impressed that he wrote a film for the Yamakasi simply titled Yamakasi!


Yamakasi: Les Samouraïs des Temps Modernes (or The Modern-Day Samurai) is a simple movie about a group of parkour loving Frenchmen who climb buildings, talk about Akira Kurosawa’s Seven Samurai and piss off the cops all day. After scaling a rather tall building, a group of young boys become inspired by the Yamakasi. One of these young boys has a heart condition and after pretending to be a Yamakasi, collapses while trying to climb a tree. A. TREE. It’s not even a particularly large tree either. Couldn’t they have him attempt to jump over a trash can or I don’t know… jump OFF something. Anything more than the most basic kid activity of climbing a tree. Although, my heart might give out too if I tried to climb a tree. I’m not what you would call “in parkour shape”. Moving on, The Yamakasi feel responsible for the whole mess. Things get worse when they hear that the greedy doctors in charge of the donor list want 400,000 francs (close to $450,000) for a new heart. They decide to become Robin Hood types, stealing the money from the greedy doctors to flip the bill. Using their parkour skills, they break into each house with the cops hot on their trail.


This movie lays the most basic foundation of a plot in order to highlight the parkour and said parkour is astounding. From free-scaling buildings to an amazing chase sequence with dogs, this movie’s stunts are breathtaking. For whatever reason David Belle is not in this film despite being friends with Besson but the rest of his crew still manages to hold it all together. Each one has their own personality like Zicmu (or music) who likes to listen to loud music or Rocket who runs real fast and then there’s Baseball who, you guessed it, LIKES BASEBALL! Besson isn’t the most clever man, but oh well! He sure makes fun movies.The personalities of the group members might be cliched but that only adds to the fun and whimsy of the film. Each one of their traits is incorporated into their parkour moves in subtle ways making this movie feel more like a live action cartoon than an action film.


While the story lacks any depth, this film is lighthearted, charming and fun. The action sequences, especially at the time, are fantastic and the film keeps a brisk pace. It’s unfortunate that it was never released in the United States. I think it would have done decently at the time and could have introduced a lot more people to parkour a lot earlier. The Yamakasi went on to create a sequel of sorts without Besson called Les Fils Du Vent a.k.a. The Great Challenge. Besson went on to create District B13 for parkour creator David Belle to star in and that movie is really worth checking out, especially since that has actually been released in America. I found a Chinese all-region bootleg of Yamakasi cheap on eBay years ago. The cover is of course covered in Chinese with the exception of “Luc Besson” and hilariously “Hip-Hop”! If you can find a copy of this fun film, it is worth your time.