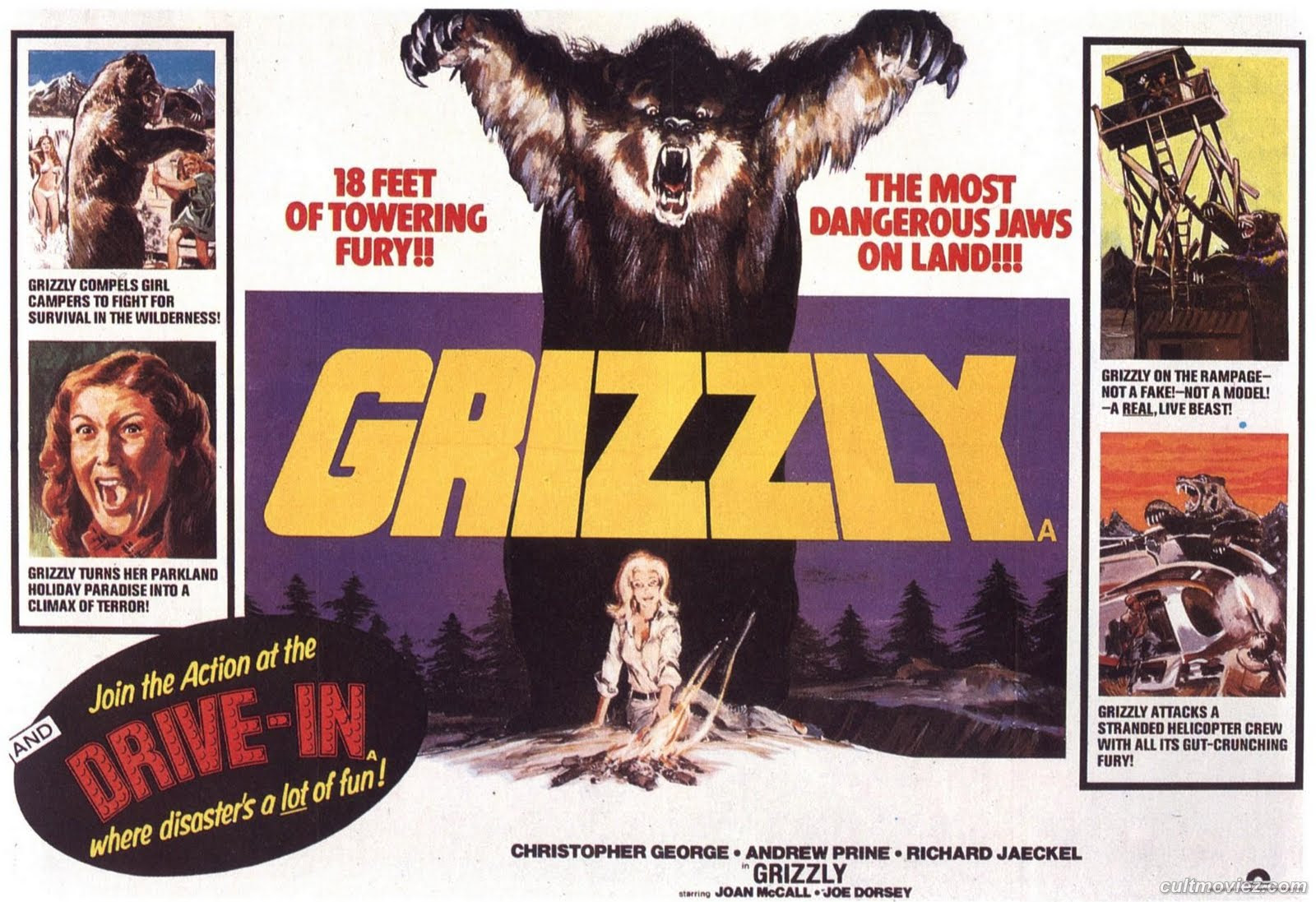 Movies about giant killer animals will never get old. Man Vs. Nature is literally the oldest story on earth. There are cave drawings that depict the struggle that man had with nature dating back hundreds of thousands of years.

It's too bad they didn't have rocket launchers back then.

GRIZZLY is a capably made man versus nature story. It came out in the wake of the JAWS phenomenon. Most likely, GRIZZLY was an attempt at a cash grab, however, it is a very enjoyable film in it's own right. Don't get me wrong, William Girdler is no Steven Spielberg and Christopher George is no Roy Scheider, but for a shameless cash grab type movie, this is pretty fun to watch.

And a bear gets shot by a rocket launcher.

About 10 minutes into the movie, we get a POV shot from the bear's perspective. He punches off a sweet camping babe's arm and tosses her into a tree. The mountainside has a problem. It's an 18 foot tall, 2000 lb Grizzly bear.

﻿ Good thing this campground has access to a bazooka.

Aside from the death scenes, the movie revolves around Ranger Kelly being too understaffed to handle the campers on the mountain, let alone a giant prehistoric grizzly. His ranger cohorts are pretty dumb. In fact one of his female rangers strips to go swimming in the middle of the hunt. Of course she becomes the bear's lover and lunch.

Beaurcrats and businessmen get involved and demand results because their lucrative business. . . of camping, is in jeopardy. You know, just like JAWS. Except camping is switched with . . . . beaching

We are introduced to Scott (AKA Quint Mk. II). He's a crazy hunter/trapper/douche with a squirrel cape. He goes in depth about how all the bears on the land are tagged and none of them are large enough to cause the carnage they've witnessed. He's they one that tells us the bear must be prehistoric due to his size, which is roughly double that of a regular grizzly bear. Could be an alien for all we know. This dude is an idiot.

Then a real rapey looking hunter's babe gets killed by the bear and drunken, inbred, redneck, hunters try to capture the alien grizzly. Ranger Kelly gets mad and worried more will die due the the negligence of untrained alcoholics with firearms running wild in the woods. He's right.

It's the plot of JAWS with no character development.

But a bear gets shot by a bazooka.

THE ART OF THE KILL:

The most notable part of GRIZZLY is that the carnage the Prehistoric Mutant Alien Grizzly causes, is very slasher-esque. The film showcases a lot of POV shots with bear snorts and breathing. A quick cut will occur showing a frightened female camper then shes bloody hanging from a tree missing an arm. During most kills, cheesy looking (assuredly human operated) arms punch and swipe at the bears victims. Totally awesome.

Another technique that ties in with that, which was most likely a budgetary decision and a time saver was how sparingly the actual bear is used. When the bear does appear later on in the film, it's original footage of a real bear, not stock footage. And a Park Ranger shoots the bear with a missile.

GRIZZLY is rated PG. This movie was made prior to the PG13 rating being issued by the MPAA. However, like JAWS, it could be considered violent enough to be an R rated film. Limbs are ripped/punched off, there's lots of blood, a child gets his leg ripped off, a horse gets his head punched off and a bear gets shot by a bazooka.

The posters for this movie are king big slam.

I was given a VHS tape of this movie. It comes in a slipcase. . . that you have to open a flap on the bottom of the case to get the tape out. The tape was released by Media Home Entertainment in 1982.

It is available on DVD. After a quick browse on Amazon however, a used copy of the stand alone DVD is $30 and a compilation disc featuring the film is $40 used. The most cost effective method of purchase of this movie is the VHS format, which is slightly less expensive.

- Watch JAWS 5: CRUEL JAWS first
- GRIZZLY sucks to watch alone. Don't do it. Have some friends over. Make up a new story for the movie while viewing, then tie your story own into the kill scenes.
- During my first viewing of the film I was drunk on Gin and Grape Gatorade. That was good.
- Eat junk food you could take camping. I had some Star Crunch, Powdered Donuts and some terrible Doritos JACKED chips.
- Fart
- Shoot a bear with a bazooka and watch as he erupts into an explosion as if he was drinking gasoline.