Collecting physical media is a quickly dying hobby.  Digital media is becoming more overwhelming and prevalent.  Streaming services offer a seemingly unlimited amount of titles.  However, the titles on Netflix and others are pushed at you based on their restricion rights with the hopes of gaining the most profit.  Likewise, the temporary nature and inferior quality of that digital content offers no sense of ownership.  However, not all physical media is better than the box it comes in, ie: the straight to video  THEY CRAWL 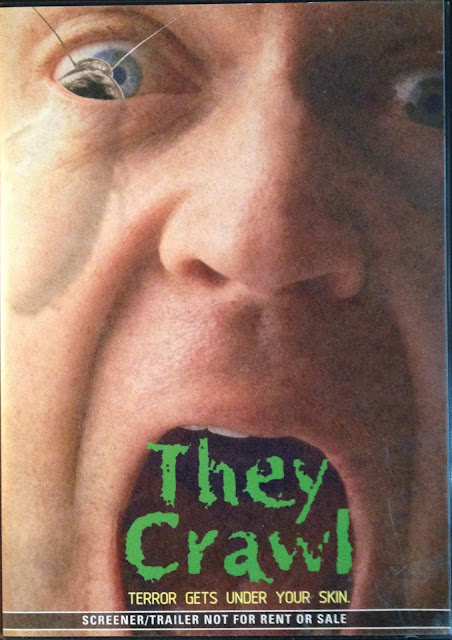 So, Pawn America had a sale on their DVDs... all DVDs are $1.  Well, a $1 will make you take a real chance on something.  This cover was enough to get me to think about it.  I mean, it's a guy yelling with a horrible looking photoshop bug coming out of his eye.  But, I was worried it might just be another Sci-Fi Channel piece of garbage.  However, it's what is on the back that made me actually purchase it. 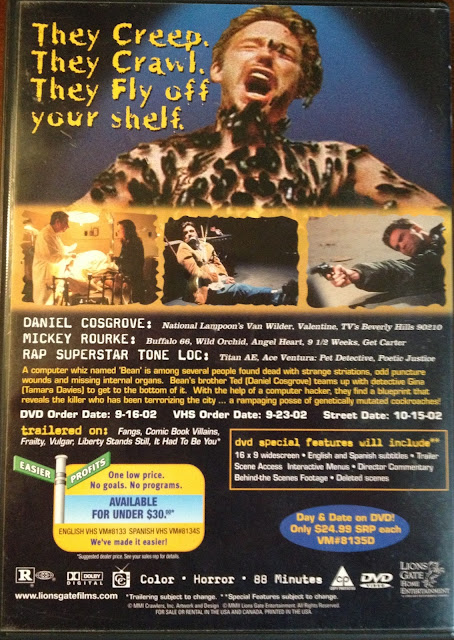 Mickey Rourke and Rap Superstar Tone Loc!  I'm, not so sure I would describe Tone Loc as a Rap Superstar, but I appreciate the ridiculous description.
The Description on the Box:
"A Computer whiz named "Bean" is among several people (two by my count) found dead with strange strictions, odd puncture wounds and missing internal organs.  Bean's Brother Ted (non-star of anything Daniel Cosgrove) teams up with detective Gina (Tamara Davies, aka poor man's Gina Gershon) to get to the bottom of it.  With the help of a computer hacker, they find a blueprint that reveals the killer who has been terrorizing the city...  a rampaging posse of genetically mutated cockroaches!"

Well, at least they give a spoiler in the description.  I think this movie is probably worth a dollar, but I wouldn't pay more than that for it.