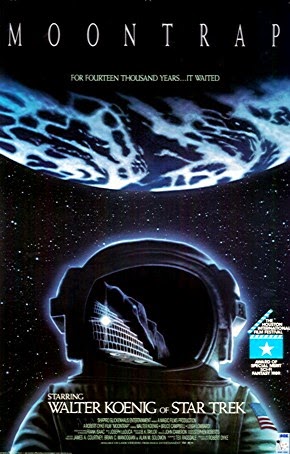 I had never heard of Olive Films (weirdly, as they have released and distributed lots of good stuff now that I'm looking) until they acquired all of the titles from Jesus Teran's wonderful little indie label, Slasher Video.  (You can hear my interview with Jesus here: http://allstarvideo.blogspot.com/2013/12/interview-with-jesus-teran-of-slasher.html ).  Their newest release is a little seen space horror gem called MOONTRAP.

MOONTRAP is the kind of movie that has old scientists telling marines not to shoot aliens because "it's a great moment for mankind."  And then in the next breath, in slow-motion, yells "Get the son of a bitch!"  Or, in other words, my kind of movie.

The basic premise is this: Chekov (Walter Koenig) and Ash (the crazy charismatic Bruce Campbell) are astronauts who find a giant alien spacecraft with a big robotic egg and decayed corpse inside.  When they bring the egg back to earth, it turns out to have the terminator in it and Chekov dominates the hell out of it.  But, little do they know that the terminator is a combo platter of robotic death and organic matter...

Well, the president decides it's time to go back to the moon.  Chekov and Ash are the obvious choices and off they go. Lunacy follows.

Moontrap gets a lot of things right.  First, space travel.  I'm a huge sucker for all things space, and this film does a great job capturing the immensity of it all.  Olive Films has done a wonderful job with the restoration and it truly is a gorgeous looking film.  There are plenty of great effects shots that show how tiny we are in comparison to the endless darkness.  Our apparent insignificance becomes all the moreso when in comparison the giant cold nothing outside.

The humor is deadpan enough that it doesn't really land anywhere, except when Bruce Campbell is doing it.  His genial sarcasm both undermines any tension that could exist in the film and lifts it above it taking itself too seriously.  It is a robot alien moon invasion film after all.

But, the thing that really works here is the way they play with the mythology of landing on the moon.  I love the stories of Buzz Aldrin, Neil Armstrong and Alan Shepherd.  I love how truly mysterious and strange space still seems even after multiple visits.  Even in the most trivial of circumstances (Moontrap, for instance), I find myself contemplating my existence.  And, I love the fictionalization of true events.  Here, we see a little robot head pop out of the moon dust just as Aldrin gets back on the lander and escapes.  When Koenig and Campbell return, they aren't so lucky.  Now there is a fourteen thousand year old robot base that they need to deal with.

This is a film that could only have been made when it was.  The late 1980s was the perfect time for combining different kinds of effects.  Light boxes, models and darkly lit sets provide a semi-believable experience on the moon.  Pre-CGI and post 2001: A Space Odyssey, Moontrap is able to take cues from the latter and not be hindered by the former.  Likewise, it seems that our imagination about space seems to have fettered.  Ever since 2003, when the Bush administration responded to the explosion of the Columbia by demanding a re-evaluation of the space shuttle fleet.  This set the stage for the last mission to outer-space in 2010.  And, here we are, physically grounded.  Moontrap could perhaps never have been made in this atmosphere.

No doubt Moontrap is far from perfect.  The slow, meticulous pacing is perfect when they are floating in space, but strange and quite dull when surviving in an oxygen igloo.  (This particular scene is so useless, that it might be one of the best in the movie).  Koenig is stiff and uninspiring.  Seems the casting should've gone opposite, but he was the star back then, not Campbell.  The villains are very interesting and have a pretty great twist, but are far from terrifying.

But, there is space, Ash, very very random nudity, and explosions.  So, worth your time.