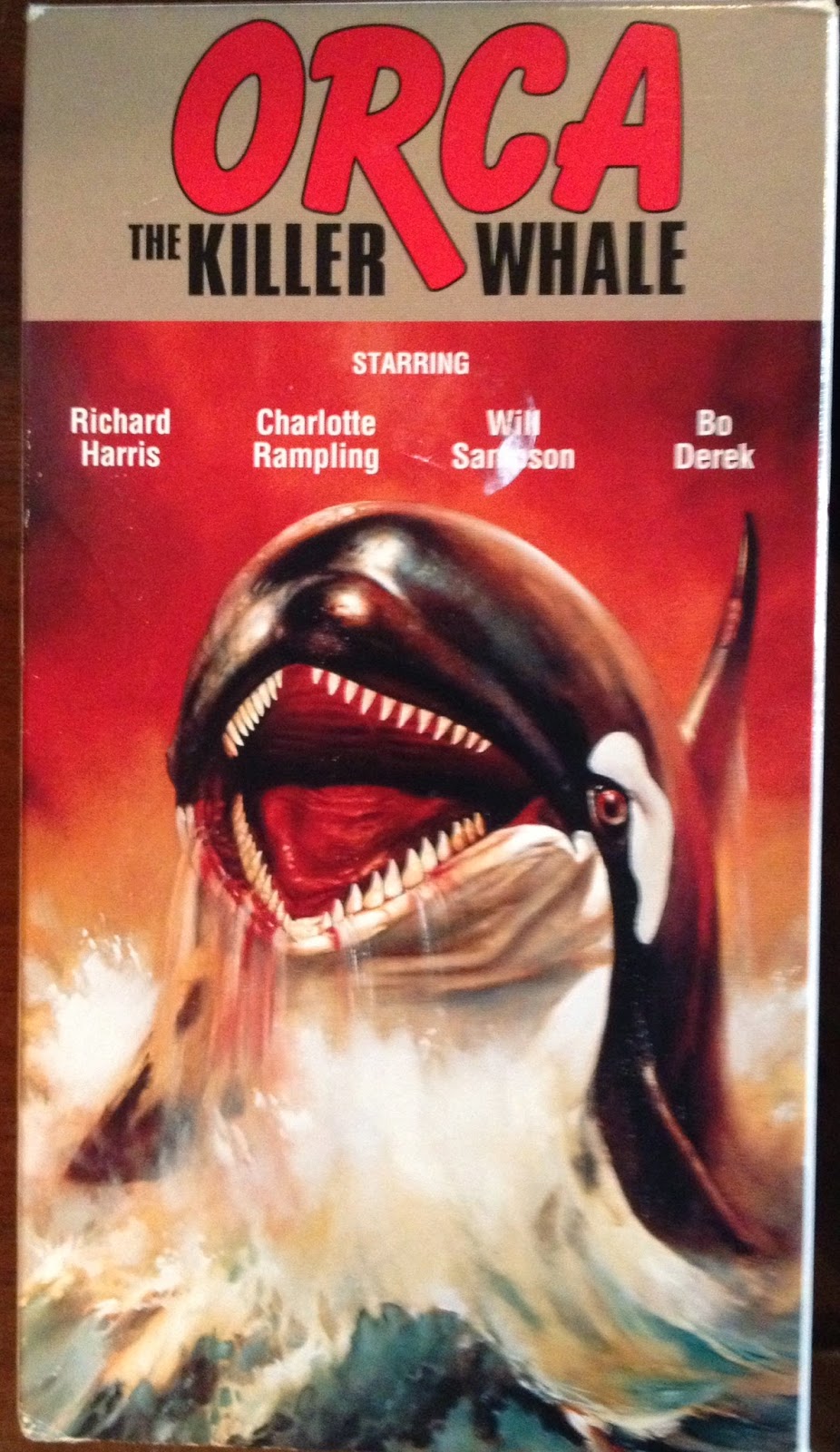 Orca is marketed as a poor-man's sidekick to Jaws 4.  By extension, you'd expect the idea is that the terrifying seas produce yet another killer animal that rampages a small community.

In reality, Orca is a lot more like Death Wish, on the water, and Charles Bronson is played by an animatronic aquatic mammal.

The film opens with idyllic music and two whales goofily jumping out of the water in front of a matte painting of a sunset.

Then, we witness a diver being chased by a shark.  Said shark gets power-slammed and tossed into the air.  Captain Nolan (Richard Harris) stares in astonishment.  "What could do that to a shark?"

The diver stands next to Nolan and replies, "The only thing powerful enough to do that to a shark is a Killer Whale."

This scene is then followed by Rampling giving lectures and doing lots of talking about all the astonishing things about the Killer Whale.  They have sonar, the fetuses have fingers (like humans), they mate for life, they're crazy smart, etc...  And then she mentions that they can also seek revenge.

Then, Nolan decides it would be super sweet to go out and capture one of these whales.  It goes pretty poorly.  He kills a female, and with it her unborn child.  The father is pretty pissed.  The way that this scene is done is surprisingly moving.  The music and the sounds of the whales are very sad.

You may remember the mediocre documentary, Blackfish.  Instead of making that, they should have just re-released this movie.  It makes me fear and respect Killer Whales, and it also has really cheesy filmmaking that is pretty sweet.

They have ridiculous scenes like fast-zooms to the Orca's eye staring at Nolan.

I guess after Jaws, there is little room for a realistic ocean advenure, but the absurdity of the whole thing is a bit laughable.

Anyway, the Orca knows its limited to the sea and can't just shoot Nolan with a rocket launcher, so it starts messing with boats and blowing up power plants.  Yes.  The Orca hits some pipes or something that supposedly starts a fire that then blows up a power plant.  As the plant explodes, the Orca jumps out of the water  in triumph.  It's absolutely ridiculous.

The superb stupidity and genuinely emotional filmmaking make this one of the more enjoyable monster flicks I've seen in a while.


You can find it on DVD or on VHS with one of the sweetest covers ever.