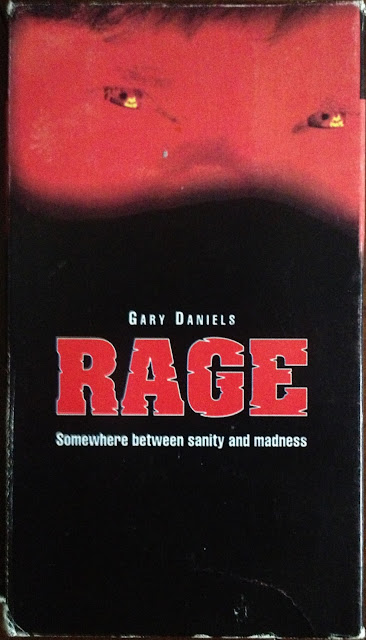 The mid 1990s were a glorious time for action films.  You could make a straight to video feature with a decent-sized budget and most likely make your money back.  Video Rental stores were in their heyday and we were able to have companies like PM Entertainment pump out countless films like this one.

At the same time, there was a general understanding between filmmakers and audiences that action and violence should be taken lightly.  Jackie Chan played up physical comedy in the style of Buster Keaton and Arnold Schwarzenegger said one-liners in the midst of brutal violence.  It was played over-the-top or tongue-in-cheek.

Many action films made now are almost completely joyless.  Films like Drive Angry and The Expendables 2 do a nice job of harking back to that time, while films like Raid: Redemption are decidedly darker and more serious.  That is not to dismiss Raid, as it was one of the more visceral and uncomfortably violent movies I've ever seen in a theater.  It just wasn't "fun."

Rage, on the other hand, is only fun.  I can't imagine taking even a single moment seriously.

The Plot:
Gary Daniels (straight-to-video action missionary) is Alex Gainer, 2nd grade teacher.  He loves his wife and his daughter.  He drives a sedan.  He gives a lecture to the students about carnivores that is about five minutes too long.  He somehow gets onto Jeffrey Dahmer.  Um?  Then, he has this exchange with a student named Roger:
Roger:  "I don't like people.  I think they're evil."
Gainer: "Sounds like Roger has lost his faith in humanity.  Why don't we all stand up and tell Roger we love him."

This is the type of quality character development and dialogue I was hoping for.    First of all, why is Gainer talking to his 2nd graders about Jeffrey Dahmer?  It just gets better.

He drops his daughter off at soccer practice or school or something... and then Emilio Rivera gets in his car and puts a gun to his head.  He tells him to drive.  Police begin to chase his car.  They run him down, pull Rivera out of the car and then knock them both unconscious.  The unsuspecting Gainer is then taken to a secret lab where mad scientists have been doing experiments on people to create the perfect soldier.  (a brand new concept never before seen in anything)  However, the scientists seem hesitant to experiment on Gainer as they "only use illegals and criminals."  The policeman explains that Gainer has an accent and is a foreigner, so it's okay.  The scientists are pumped because this specimen isn't "malnourished" and in "perfect health."

Alright, stop.  So, I'm pretty sure the writers or directors or someone thought this was a pretty good idea.  Maybe they were trying bring a little politics into it?  Maybe they were trying make a statement about how we view Latinos and immigrants as disposable.  Maybe.  But, probably not.  It's probably a plot device to explain away why an English guy makes sense as an American action hero.  And, even if they were trying, they failed miserably.  If you're trying to bring light to racism, why is it a white guy that finally breaks the system?  Why are all of the Latinos "malnourished?"  Either way, here we are.  Gainer needs to escape.

And, escape he does.  With great flair.  He kills about 45 people in the span of seven minutes.  He beats dudes up while he is in a straight jacket, he uses a tazer, kicks a douche in the crotch, shoots a bunch of people with an uzi...  Then he gets tazed and put into the boot (like how I used the English term for trunk?  Eh?) of his car and driven out to the middle of nowhere.  They plan to drive the car off a cliff with poor Gainer inside.  However, first they remove him from the boot.  What?!  Oh, no.  He's awake again.  He proceeds to dominate everyone, including shoving a dude in his car and then pushing it over the edge.

He gets picked up by a truck driver, proceeds to have a ten minute chase scene, in which he says, "I've got nothing to lose!"  What?  Already?  What have you lost?  You still have a wife and daughter, house, car, job, citizenship, freedom.  Well, apparently none of that counts anymore.

Then, the most incredible sequence in film history.  Gainer gets on top of his truck and plays chicken with a loose cannon police officer who has commandeered a school bus.  Gainer jumps just as the two giant vehicles hit and he flies over the bus, to roll to a safe stop.  He has a bit of a limp for awhile, but don't worry, he drinks half a gallon of milk at some weird S&M farm and is fine.

A lot more action happens.  There is a boring journalist that provides more needed political insight and room for debate on the media.

The Evaluation:
I obviously think this movie is amazing.  I love lazy and poorly manufactured plots and characters in movies like this, because we don't care.  You aren't actually invested in the hero at all.  You want to see him do sweet stuff.  And, that he does.  Which leads me to my favorite part of this movie.  There is no discernable reason why Alex can do all these amazing things.  I kept thinking they were going to annoyingly reveal that in a past life he had been a spy or a Navy Seal or something.  Nope.  Just a dude who knows how to drive an eighteen wheeler, shoot uzis, pistols and shotguns.  He somehow is an incredible fighter that can never be stopped.  At one point they allude to him doing Karate and his Sensei helps hide his family (which leads to the most awkward exchange ever.  Gainer and Sensei speak in Japanese for two minutes without subtitles.  Incredible.)  But, none of that explains how he can fall from a helicopter through a giant pane of glass and have no injuries.  Perhaps we're meant to believe that the injection he gets from the mad scientists has made him a super soldier?

If you truly want to have a great night, you could do a whole lot worse than Rage.

In case you needed convincing
The Hype:
I think if you explain to your friends that Gary Daniels puts a man into the Torture Rack of Doom and then tosses him over the railing at a mall, they will watch this with you.

Set Yourself Up:
If you're going to do it right, you need to plan ahead.  If you're like Alex (he's the everyman, so you are), you need leftovers and milk on the ground to regain your strength.  Go get some Kentucky Fried Chicken and leave it in the fridge overnight.  Bring out the leftover KFC and a half-gallon of milk.

The Goods:
The PM Entertainment VHS is quality.  You get two trailers for other Joseph Merhi films: Skyscraper starring Anna Nicole Smith and The Sweeper.  Both trailers are about five minutes long and you get to see about the whole film, which is sweet, because you will probably never watch more than that.