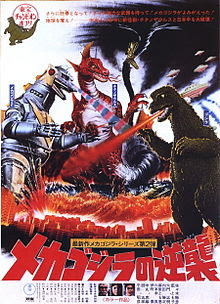 The 1970s were a strange time for Godzilla.  After the experimental wonder that is Godzilla vs. Hedorah and the appearance of a Godzilla-based theme park in Godzilla vs. Gigan, the kaiju franchise stumbled into the metaphorical ocean with 1973’s Godzilla vs. Megalon.  Declining budgets and randomly goofy storylines had taken their toll, resulting in an entry that is practically unbearable without the help of the classic Mystery Science Theater 3000 episode.

Desperate to reinvigorate the series, Toho introduced Mechagodzilla in 1974.  It was a nice idea, but the resulting Godzilla vs. Mechagodzilla did not exactly live up to the concept of this iconic villain.  Possibly to blame was the Planet of the Apes series which inspired the evil, not-exactly-threatening space apes of this story, but I would instead point the finger at King Seesar.  Godzilla was clearly not having much luck with sidekicks by this time, with this kaiju dog and Megalon’s Jet Jaguar being a far cry from Anguirus or Mothra.

Adding to this problem was the fact that rival studio Toei was dominating the kaiju marketplace on television while Hollywood imports were defeating local movies at the box office.  Perhaps there was no longer any room for Godzilla in the marketplace.  Toho had one final ace up their sleeve, however, and his name was Ishiro Honda.

The grandfather of the kaiju ganre, Honda’s work includes the original Gojira along with such classics as Mothra, Matango, Atragon, The Mysterians, Dagora, Frankenstein Conquers the World, War of the Gargantuas, and Yog: Monster From Space.  If the Showa era was going to go out, having Honda return one final time was akin to ABC crawling back to David Lynch for the Twin Peaks finale.  It might have not been able to save the series, but damn if it didn’t go out on top.

1975’s Terror of Mechagodzilla not only brought Honda back into the fold, but also composer Akira Ifukube after a nine-year absence.  The story, a result of a screenwriting contest won by the series’ first female writer Yukiko Takayama, focuses on mad scientist Dr. Mafune.  You see, evil aliens are funding the doctor to reconstruct Mechagodzilla and have also resurrected his dead daughter as a cyborg.  Because of course they have.

Part of what makes the story work is its slow pace and serious tone.  In fact, Terror of Mechagodzilla is perhaps the most adult film in the series since the original two entries.  Along for the ride is actor Akihiko Harata as Dr. Mafune, best known for his turn in the original Gojira as Daisuke Serizawa.  One of cinema’s great tragic figures, Serizawa was the creator of the shockingly lethal Oxygen Destroyer, which he ends up sacrificing his life for just to keep it away from the rest of the world.  Having Harata return to play another scientist is yet another way the series comes full-circle, along with featuring another shocking suicide by the time the film ends. 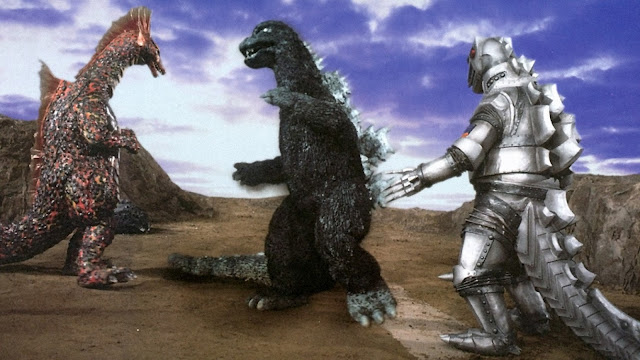 But enough about the humans.  Don’t be fooled by Terror of Mechagodzilla’s title, because the true star of this film is the awe-inspiring Titanosaurus.

Created by special effects expert Teruyoshi Nakano, this all-new creation is a refreshing step away from the increasingly alien/robotic villains that had become the norm.  Its simple, amphibious design instead harkened back to the old days of Anguirus and Baragon when kaiju resembled evolved dinosaurs.  With the help of Nakano’s low-angle cinematography, Titanosaurus is an immensely menacing creature, one of the very best additions to the Godzilla mythos, though also tragically one of the very few Godzilla villains who never made the title.

Godzilla himself enters the picture in style and comes across more terrifying than he has in years.  That is, until the very last shot of the film, which would be the last time audiences would lay eyes on the beast for nine years.  Featuring a different Godzilla costume previously used only for exhibitions, he flashes a big goofy grin before waddling back into the ocean.  What has previously been a somber Showa finale transforms into “Bye kids!”  It’s weird, but then, I suppose that’s to be expected by this point.

Like many of the Godzilla films, Terror of Mechagodzilla’s U.S. release got pretty complicated.  Originally, there were two separate versions made in 1978, a highly edited one by Bob Conn Enterprises for a theatrical release (known as Terror of Godzilla) and a television version done by Henry Saperstein which was the first to call this Terror of Mechagodzilla (the Japanese title is actually Mechagodzilla’s Counterattack, also woefully neglecting Titanosaurus).

The version I watched was Bob Conn’s Sony Wonder 2002 edition on DVD, which I do not recommend.  This edited version cuts out a lot of the violence and I believe the only shot of nudity to ever appear in a Godzilla film, and also makes the tragic suicide quite confusing.  I recommend hunting down the Toho Master Collection version released last year that features both the original Japanese and English versions.

When to Watch:
Saturday afternoon at the end of a small marathon of old Showa Godzilla picks.

Alone or with Friends:
With friends, of course.  Have a whole kaiju party, but toss out anyone who complains that this one is ‘too slow.’

Meal or beverage
If you want to go Japanese, save the sake toasts for the far more depressing Godzilla vs. Destroyah.  I recommend Kirin beer.  Also, junk food.  Lots of junk food.

- Joseph Larsen
Larsen is a filmmaker, writer and lover of Godzilla who resides in Minneapolis.