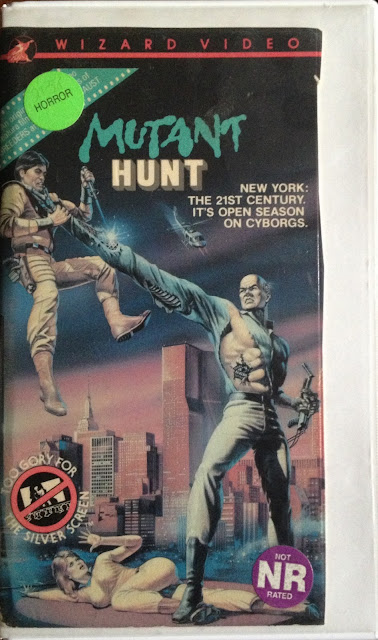 On the cover of the tape it says this film was too gory for the silver screen.  I doubt that.  I think it was just too stupid / awesome and was never intended to be a theatrical release.  Back in the wonderful days when you could just shoot a film and put it in video stores.

Apparently cyborgs are bad news, even though they are just guys who have flat tops and wear sunglasses all the time.  They're apparently also mutants.  There is lots of exposition about a drug called euphoron, introducing mutations, cyborgs who are just killing for the pleasure of killing, (tearing off heads, choking out suckers, throwing out windows, power-lifting etc...)...

There is a bounty-hunter / go-go dancer that is in love with Riker, a dude that wears sweet underwear and has rusty machetes, shotguns and crossbows on the walls of his apartment.  He gets a bomb placed in his head (my favorite plot technique in any movie), and gets it out two minutes later.  Cyborgs kill a bunch of people.  Riker's friend Johnny Felix has a killer mullet that's super greasy and he spin-kicks cyborgs.

All this gets started when a hot doctor is in peril and goes to Riker for help.

In a later sequence a cyborg is half-robot and the effects are actually pretty impressive.  However, I have no idea how he got into that scene.  He explains a bunch of stuff to the doctor about how she's needed and then carries her off.

Johnny Felix pounds on a bunch of street toughs with the help of Riker.  A corporate stooge explains that euphoron mutates cyborgs.  But, really you don't care about any of that.

There is also a weird character who is a euphoron junkie that is attracted to cyborgs and really has no place being in this film.  As an aside, there is a five minute scene where she unwraps a new(?) kind of cyborg and just keeps rubbing the bandages (I think they're bandages).

The cyborgs also melt or something.  I don't know what's happening there.

What's really fun about this movie is the absolutely incomprehensible film-making.  The editing and dialogue make it clear that there was no real plan.  Kincaid probably got some funding for a title and just started shooting.  A few days later, the effects crew probably came up with that sweet half-robot and then they just decided to wing it.  Overly complicated plot developments, under-developed characters, and stupid awesome music make this incredibly enjoyable to watch, however.


The Tape:
The VHS will do the trick, but it looks like Full Moon's Grindhouse label has re-released it on DVD as well.

I will leave you with the Amazon description:
When New York is besieged by mutant cyborgs with an insatiable lust for ripping human beings apart, it's dedicated mutant hunter Matt Riker to the speedy rescue! A diabolical scientist, ""Z"" has injected these mechanical zombies with a sexual narcotic that induces a thirst for killing. All over Manhattan, the robotic Romeos begin loving 'em (THIS NEVER HAPPENS IN THE MOVIE) and leaving 'em...dead. With two trusty mutant-hunting pals, Riker descends into the dark tunnels beneath the city to find Z's secret lab. Riker attacks the with revolutionary lasers! The mutants are clamoring for more of the demonic drug! How are Z's plans going for world domination? Not so hot. It's a terrifying fight to the finish as you'll discover when you scavenge for danger on the MUTANT HUNT.