Review: DEVIL TIMES FIVE (aka Peopletoys aka Horrible House on the Hill) 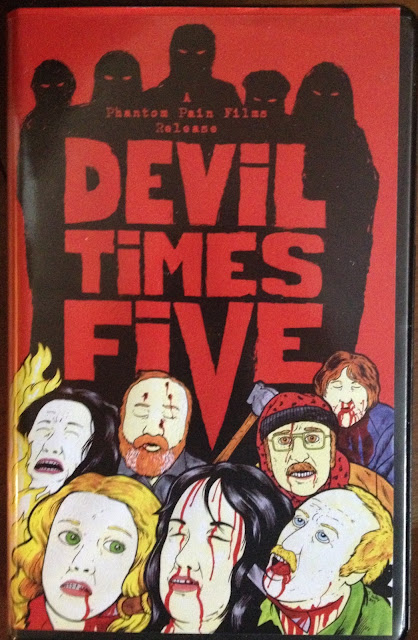 "Not since 'Village of the Damned' has death become so savage... or survival so hopeless!"

Gratuitous / perfect slow-motion, Leif Garret (the Justin Bieber of the 1970s), psychopathic murderous children, a character named Papa Doc, an awesome alternative title and super sweet goofy music make this one of my highlight purchases from Cinema Wasteland. Distributed by Phantom Pain Films (what seems to be a great little one-man-operation) and limited to 50 VHS copies.

Production was a disaster.  Director Sean McGregor was forced to leave the set after a few weeks of shooting and David Sheldon took over.  Much of the footage McGregor shot doesn't make it into the final cut, as it was deemed "unusable."

The great thing about disasters like this is that you can actually see it fall apart on screen.  In certain scenes Leif Garret is wearing a terrible wig, the snow cover is gone, characters seem more tan, etc...  It also provides for very strange editing, which gives the film a disorienting feel.

The Rundown:
Jarring and disorienting editing makes it unclear, but I'm pretty sure that a yellow van crashes on a mountain road, and five little kids in the back survive.  They take what they can from the dead driver and proceed to look for shelter.  Due to Leif Garret's ingenuity, they make it to a large resort home owned by Papa Doc.  Papa Doc hates his son-in-law, Rick, who has slept with the housekeeper, Lovely, which apparently turns on his wife, Julia.  There is also a "handyman" named Ralph who is a little slow, but loves his rabbits.  Harvey Beckman is an alcoholic who hates his life and especially his boss, Papa Doc.  Ruth Beckman is also an alcoholic, who has no respect for her husband.

The kids:
Leif Garret (David) - cross-dressing kid who is "smart" but can't beat Harvey Beckman at chess, and can't split wood, but is able to split skulls
Sister - novice nun with glasses who is good at doing dishes and drowning grown women
Ralph - non-descript little man
Brian - little soldier who loves to gamble and threaten little girls with being "punched in the mouth"
Susan - hippy who loves fire

Julia teases Ralph about sex.  It's very uncomfortable.  Lovely and Julie have a pretty killer "fight" that doesn't make a whole lot sense.

The kids murder some random dude in super slow-mo.  It's amazing.

The unsuspecting residents of the resort take in the five kids.  However, any mention of parents and the kids quiet down.  Papa Doc continues to have a sweet name and get mad about everything.  The kids sneak away and rig up the generator to kill Ralph, which it does, in superb fashion.  Rick finds him and suspects foul play.

From there, it gets awesome.  Though I would love to go into the details of the rest of the film, I believe it's probably best seen for yourself.


The Evaluation:
This is pretty damn awesome.  Each character is distinctive and each kill is creative and funny.  The music is hilarious "nursery-rhymey" and the acting is superbly messed up.  This is one of those little gems that I would've never seen if Phantom Pain hadn't done such a great job putting it out.


Trivia:
Set Yourself Up:


The Goods:
If you have a chance, try to pick up a copy from Phantom Pain Films.  The VHS comes in a very nice big box with excellent original artwork.  Since he made such a limited number of copies, you may have a hard time, but visit www.phantompainfilms.com for any info.