Interview with TI WEST & Review of THE SACRAMENT

So, I happened to be at Cinema Wasteland, not paying attention and I was scheduled for an interview with TI WEST.  I'm stupid, missed the opportunity to do record the interview over the phone, and only had ten minutes.

Turns out this movie didn't get a theatrical release, which is ridiculous when you look at the crap that does.

Anyway, here is a short review and discussion with Ti, based on random notes on Holiday Inn notepad: 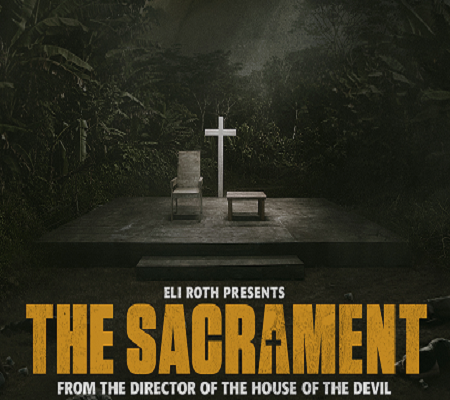 ASV: So, you've made a really fascinating film with THE SACRAMENT.  It seems derived directly from Jonestown.  You've also made other films that deal with cults, what is the inspiration for this type of film?

WEST: I really wanted to make a horror film that has no supernatural elements.  I used Jonestown as the framework, and I see this human experience repeating itself over and over.
You know I really love the idea of being immersed in the real world, and how horrifying it truly can be.  I think the idea of reality being presented in a fun way has always been interesting to me.  Hopefully that works in the movie.

ASV: I really love the actor who plays Father.  Where did you find him?

WEST:  I actually originally saw him on the Louis CK show.  He has a really great sense of humor, and I wanted someone I would really like working with.  Most people probably recognize him from the coin toss scene in No Country for Old Men.  He is a real force in the movie, and provides a huge character at the center of the film.  Almost everyone that sees the film talks about how he great he is.

ASV:  So, VICE is a real company...  what made you want to use a real organization in this situation?

WEST: Yeah, they have a show on HBO.  They go into all the same places that CNN or Fox News does, but they do a great job of not being biased, or having a political slant.  They do a ton of video journalism, which they call "immersionism."  They do a lot of esoteric, provocative and scary stories.  It's real life, and far scarier than most things you see in films.

ASV:  Did you grow up in Virginiia?

WEST:  Delaware.  I lived in New York for six years and now am in LA.

ASV:  How did growing up in the Northeast shape how you make films?

WEST:  Yeah, we shot House of the Devil in Connecticut, and that suited my sensibilites perfectly.  The Innkeepers was also shot in the Northeast, and I love how creepy the fall there can feel.  It suits my childhood.  With The Sacrament, I wanted to move it to a foreign environment.

ASV:  Was that choice designed to follow Jonestown as well?

WEST:  You know, we shot it in Georgia, and I wanted it to feel very non-specific.  It is supposed to be outside the States, and could be in almost any part of the world that is hot.  Jonestown is a very specific place, and though that was a jumping off point for me, this is not Jonestown.  It's the echo of that event.

THE FILM:
I have enjoyed West's films mostly for their setting and pacing.  Where House of the Devil is like a 1970s Halloween / Rosemary's Baby mashup, Innkeepers is a modern ghost story.  Both capture what they're trying do really well.

The Sacrament, likewise, is a brooding, slow-burn build.  A photographer (Kentucker Audley, yes, his name is Kentucker), is concerned about his sister (Amy Seimetz), who has sent some suspicious letters that lead him to believe she's joined a cult.  So, a reporter (AJ Bowen) and cameraman (Joe Swanberg) from VICE go down with him to check it out.

As mentioned in the interview, the set-up is basically Jonestown.  But, rather than having Jim Jones, you get the awesome Father character, played brilliantly by Gene Jones.  Jones is absolutely the standout of the film.

West plays it like a documentary happening real-time.  Almost like something in the vein of Cannibal Holocaust, so you expect that its going to get crazy.  And, he does a wonderful job of building tension.  After the interview, I have since watched VICE and understand better what West is getting at.  True life is truly more horrifying than anything in a horror movie.

But, here's where we come to my problems.  The "documentary" or "POV" style of film-making is problematic.  West manages to do some nice camera set-ups, and keep it looking interesting, but I think that's really the problem with these types of films.  It's always a matter of how good it manages to look despite the style.  But, that style was ill advised.  Like all of these films, it gets held up at moments while characters look into the camera, make pleas for their lives or remind the cameraman to "keep filming" or ask "did you get that?"  All of this gets rather tedious fifteen years after Blair Witch.

Likewise, it never really raises above the Jonestown story.  It never becomes something more.

But, let me get back to Father.  The way that he captures every scene and has a very creepy air, make up for any short-comings.  He's a wonder to watch as he enters into his first scene.  He has a commanding presence that is chilling.

At the same time, I am fascinated by cults and stories like Jonestown, so I am very pleased to see West head in that direction.  He is one of the major names of his generation, and I look forward to see where filmmakers follow him with this one.