Typically, when I think of Troma, I think of Mutants, Sgt. Kabukiman, Monsters, low-brow comedy and frankly, movies that I don't typically want to watch. Troma always seemed to make absurd movies, simply to make absurd movies. Although I can appreciate many of their efforts, to me, getting comedy, sci-fi, horror, etc. to work in the context of a single film is an extremely difficult task for a filmmaker.

Lust For Freedom isn't what Troma is known for but it is still a hybrid film. It's a mixture of a Revenge movie and a Women's Prison flick. I have seen many negative reviews of this film and I think this is why. It isn't typical Troma, and it doesn't quite scratch that Revenge flick feel or the Women in Prison movie nerve.

I think it's a pretty great movie. There's no winking at the camera that is present in many Troma productions. Everything is played straight and the characterizations of the cast come straight out of exploitation stereotypes. The big scarred up Evil Indian. The wiener dude with the crossbow, The evil doctor and his. . . cowboy assistant. . . you know, the usual. The plot centers on Gillian Kaites. The film opens with narration by Gillian.. She and her boyfriend are cops partaking in a sting operation. He is killed and she just wants to escape her life. Gillian is pulled over near the Mexico-California border by Sheriff Coale. Coale takes her in for questioning about a hitchhiker she picked up. But little does she know she will be framed for drug possession, imprisoned indefinitely, and be up for sale in the flesh trade.

The driving character trait of Gillian is guilt. She feels that when she was an undercover cop, "Cops were dying all over the place and all I could do was act like a woman" (Yes, this is an actual line of narration in the movie). Throughout most of the film she is a powerless, victim to the corrupt correctional system. In the end, Gillian is challenged by the oppression. Her life sucks, but she becomes the advocate for the women with something to live for.

In between her feeling sorry for herself and the realization that she can no longer sit idly by while her fellow women are tortured, lots of sweet stuff happens. Wrestling matches to the death, torture, karate fights, lesbian sex, again, the usual.

There is a very clouded and confusing feminist undertone to the film. Gillian herself is the catalyst to thwart the evil male sex trade. Even though she was once a very strong, skilled, Police officer at one point, she was not willing to stand up when her fellow females were being raped, tortured, traded, and shot with crossbows. She wakes up to the fact that these men are evil and essentially starts the prison of fire and kills a bunch of dudes with an AK-47. It rules.

Not sure why so many reviews of the film are negative. Not sure what people were expecting. It's a fun exploitation film. Just by it's very nature it's not for everyone. If you're into trashy low budget movies. . . that do not feature monsters or mutants or poor attempts at comedy; but feature plenty of sweet 80's babes, big evil rapist Indians, pseudo male hating revenge,  and greasy crossbow dudes. This one's for you.


One of the most important and wonderful things about this film is the inclusion of Grim Reaper on the soundtrack. Apparently they were Troma fans and offered some of their music to be used in Lust For Freedom. . . Including their song, Lust For Freedom.

The easiest way to describe Grim Reaper is as a more melodic version of Iron Maiden with arguably a more talented (and much more hideous looking) lead singer. Not to mention, much worse song structure and musical talent displayed. Regardless, Grim Reaper still kicks ass. Very much a sign of the times. If you like 1980s metal, you'll like Grim Reaper.


This video features many clips from Lust For Freedom

Two of their tracks are featured Rock You To Hell and Lust For Freedom are both prominently featured in the film. And by prominently featured I mean PROMINENTLY. Rock You To Hell is played at least seven times. Lust For Freedom is played at least four (I sort of stopped counting). . . It's truly incredible how well these songs work within the context of the film, and when they play, you know something gnarly is going to happen. 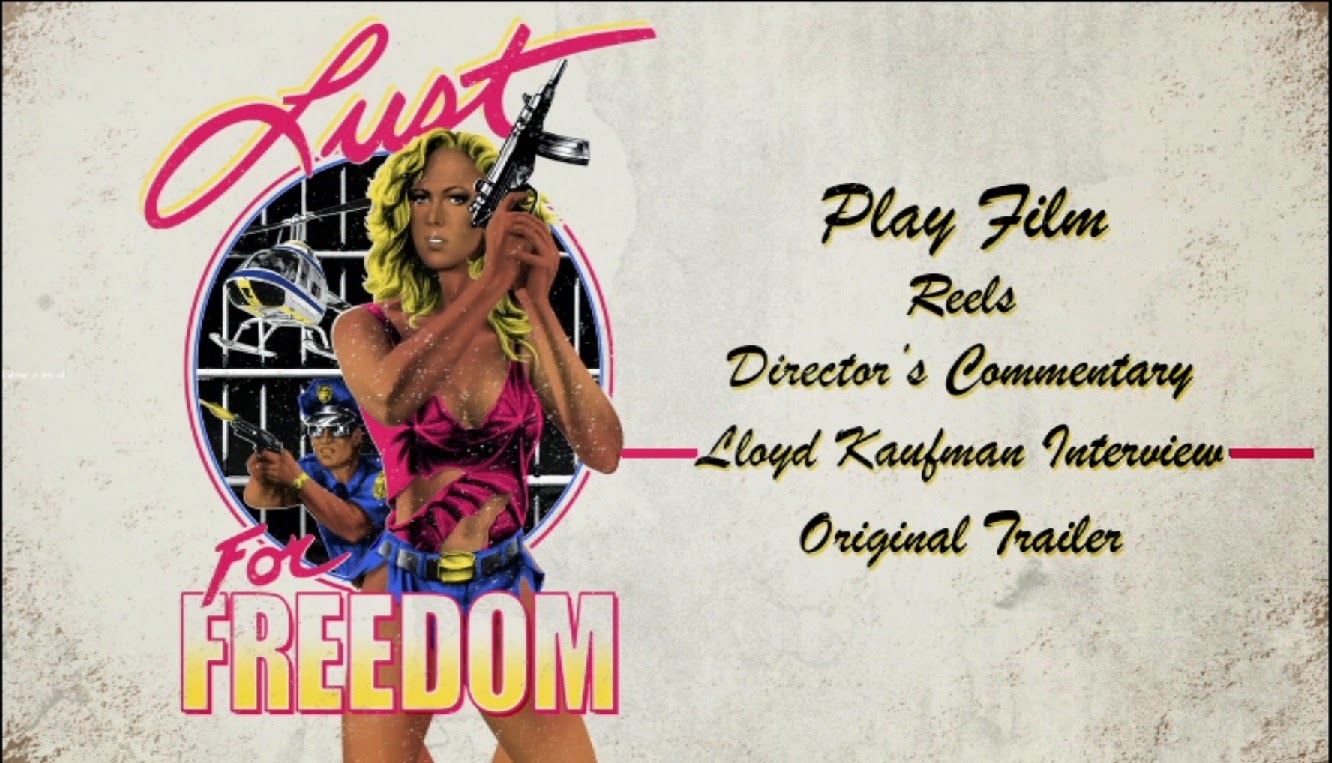 First and foremost, the disc packaging is wonderful. The art looks like it was re-purposed art assets from a UK VHS release of the film. The assets are recolored and placed in a very 1980s styled layout. There are no logos or names on the front it's just a full cover of art, which looks fantastic. It's an overt attempt at looking "80's" but for this film, that style really works.

The video quality is pretty good overall. Vinegar Syndrome's releases (of the 5 or so that I have seen) typically look quite good. Lust For Freedom in particular is a film that I am sure that the original film assets were likely not well cared for. The video quality is the best it can be. Purchase this disc (or any Vinegar Syndrome release really) with confidence.  They don't just push out any old garbage transfer.

As for features, there are a few. There is an interview with Troma's own Lloyd Kaufman. . . and he has a band aid on his head. . . the interview is insightful and interesting. He gives an overview of the production and how the project became a Troma Production and discusses the business end of the project.

There is also a Director's commentary on the disc. For the most part it's alright. There's a lot of hemming and hawwing that was annoying early on. Overall, it's worth a listen and typically movies of this ilk do not receive a commentary, so I can't really complain too much.

Overall, this is a fantastic package and well worth your time. I think it's important to support companies that take time pride in preservation of genre films and the benefits of physical media. Especially as we trudge further into the Digital Age. Vinegar Syndrome is doing great work and deserve a lot of credit.

Lust for Freedom on Amazon