Review: THE MAN FROM HONG KONG (aka DRAGONFLIES) 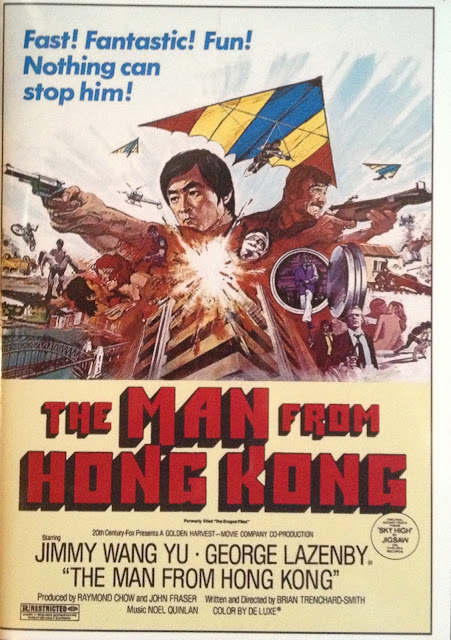 The combination of Golden Harvest and Brian Trenchard-Smith couldn't be sweeter.  The complete lack of inhibition present in all of Trenchard-Smith's films gels perfectly with the action elements of Hong Kong cinema in the 1970s.

Obviously inspired by James Bond, it makes for something so much more complicated.  Where Bond is a misogynist and imperialist, Inspector Fang (played so non-chalantly by Yu Wang) must deal with the racism of Australia (" I didn't meet a Chinese yet that didn't have a yellow streak") and the bureaucracy of Hong Kong, which was still controlled by the United Kingdom.

At the same time, there is a very present Bruce Lee vibe.  The track suit Yu Wang wears when he goes on the offensive against the gang looks strikingly familar to Lee's suit from Game of Death, but it's blue instead of yellow.  Likewise, the fight in the training facility is very reminiscent of the awesome fight in Chinese Connection.  This is definitely not to be a criticism, but instead to express the way this movie "feels."

Of course, all this is sub-text and on it's face, it's just a killer kung fu action film.  And, at that, it excels.

Ozploitation films in the 1970s were notoriously dangerous productions for the cast and crew.  This one was especially so.  During the opening chase scene a car rolls over and explodes.  The door blew off the car and came within a few feet of the camera, almost killing Trencard-Smith and the cameraman.  George Lazenby was burned during the final sequence, when he couldn't get his flaming jacket off.  Yu Wang crashed the hang-glider into some rocks on Sydney harbor and fell 100 feet, causing him to be knocked unconscious and missing from the set for a few days.  Two stuntmen were injured in a car crash and a sound recordist broke his ankle.  Brian Trenchard-Smith almost lost his vision when he was sprayed in the eyes with chemical spray.

But, the film was finished, and it's great.

The Rundown:
The film opens with "Sky-high" by Jigsaw, and is perfect.

So, Sammo Hung gets off a bus to meet a really scummy looking tool who has a sweet vinyl bag.  Well, George Lazenby doesn't like these two exchanging luggage, so he points his gun at them and tells them to freeze.  Sammo runs away and then tosses a big rock at Lazenby.  Meanwhile, scummy is shooting at a helicopter with a little pistol.  Commence sweet fight on top of a cliff.  Apparently Sammo is a wanted criminal in Hong Kong.

Inspector Fang meets up with a reporter (Rosalind Spiers) from Sydney who accidentally flies her hang-glider into the police station.  Obviously they roll in the hay, and then Fang heads off to Sydney.  Apparently during shooting, Yu Wang made it clear that he disliked Rosalind Spiers and Australia in general.  So, that love scene was probably really fun to shoot.

Once Fang arrives, he dominates Sammo in jail and forces him to talk.  He then prepares him for extradition to Hong Kong, but Sammo is killed by a sniper.  Awesome foot chase scene followed by awesome jump kick off a dirt bike followed by awesome fight in a restaurant's kitchen ensues.

We then head to Cobra Kai headquarters and watch henchmen get the crap kicked out of them.

The Goods:
The Trash Palace bootleg is pretty great quality.  Like most, it's taken from a VHS.  But, your other options only include some Region 3 DVDs that will run you around $30.00.  Obviously, you get no special features, but the feature itself is special enough.