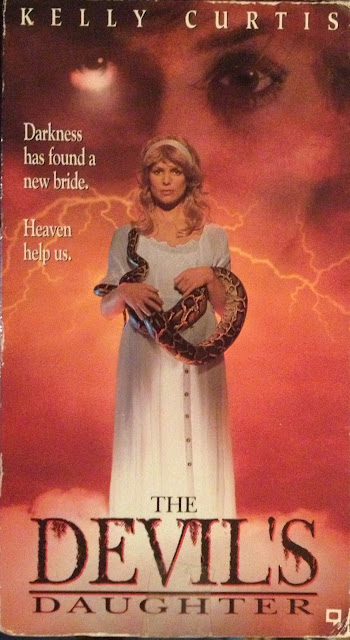 Hippies love to hang out in the desert, shoot sling-shots and paint butterflies on boobs. Unfortunately for them, Rolling Stones quoting Damon isn't just a drifter, He's a psycho killer cult leader.

Mary loves to get groceries, but Trench-Coat Mafia interrupts and informs her she has "disobeyed."  He then follows her home and cuts her down.

Pickpockets love to pick pockets, but when they get to Trench-Coat Mafia's pocket, they find Mary's heart.  Unfortunately for Trench-Coat Mafia, this outs him and he is forced to commit suicide.

The villain from Bill and Ted's Bogus Journey (Joss Ackland aka De Nomolos) decides, "It's time.  It is time."

And, that is the first ten minutes of the film.

Michele Soavi is the brilliant auteur behind The Church and Cemetery Man.  He shares the ability of Lucio Fulci and Dario Argento of keeping things crazy fun and intriguing, without having the plot be too much of a bother.

However, where The Church has the crazy style of a Giallo placed in Don't Look Now territory, The Devil's Daughter is like Rosemary's Baby meets The Beyond.  Soavi's film unfolds slowly, allowing the story and characters room to develop.

I love cults.  Pretty much in any context, they are extremely fascinating.  The human mind can be so easily manipulated, and cults make for a great frame of reference.  They also make for great horror villains.  Because they could so easily be us, or our neighbors, or our family.

Miriam is driving and enjoying her life when De Nomolos ends up in the road.  She almost hits him and feels pretty bad about it, so she offers to let him rest at her place while he recovers.  De Nomolos is a pretty annoying psychic dude who proclaims, "religion helps you die."  He has a mysterious box with some creepy bugs that crawl into Miraim's mouth while she is sleeping, causing her to dream about a big naked guy tied up in a tree.  What follows is a really neat yet mysterious dream sequence involving a giant bed sheet and bird pecking at her neck.

When Miriam awakens, she finds De Nomolos pretending to have a heart attack.  She goes for help, and De Nomolos goes to the basement to find a secret door, which leads to a giant man-hole cover.  He removes it, and throws a flaming paper bag down there.

Miriam returns with the doctor, who apparently hates rabbits.  Did I mention that Miriam has a rabbit?  Well, the doctor hates it, and then pronounces De Nomolos dead when he arrives.  Paramedics arrive, even though no one called them.  Seems mysterious, doesn't it?

Miriam goes looking for the rabbit, whose name is Rabbit, but she doesn't find it because it has gone upstairs to watch television.  Yep.  Miriam finds an Asian woman downstairs instead.  The woman speaks in broken English and runs away.

The next day in class, one of Miriam's students draws the bug that De Nomolos put in her mouth.  She then finds out that the bug is extremely old, and has been extinct for millenia.  They were known for crawling into people's brains and laying eggs, eventually killing the person by all the babies eating their brain.  Then, Miriam's friend gets possessed by a handkerchief...

I'll leave it there, as it is obviously apparent that there is just so much going on, it doesn't make sense to go beat by beat.  I'll just say, the crazy doesn't calm down.


The Evaluation:
Soavi is an underrated talent from Italian horror.  He and Lamberto Bava both just came onto the scene a little late.  But, I think in some ways that gave them the freedom to be super crazy.  Soavi has the ability to create these very little memorable scenes.  For instance, there is a scene after Miriam's friend is possessed when she goes to a truck stop to get some action.  She pulls one of the truckers into a trailer, presumably with plans of murdering him.  When his friends come into the truck, what they find instead is the trucker stabbing the woman repeatedly.  Behind him is a piano, which he repeatedly leans against and causes a sort of eerie accidental song to play while trying to deliver dialogue.  It's both unsettling and humorous at the same time.  And, the moment is never mentioned again.

Soavi manages to keep the crazy coming, and at the same time be engaging and mysterious.  I wouldn't say he brings it all together in the end (how could you?), but being along for the ride is a joy.

The Goods:
You don't really have a lot of options.  There are a few European copies and bootlegs, but cost-wise, your best option is VHS.  You can generally find it used on Amazon or Ebay for under $10.  No trailers or anything cool, just the film.