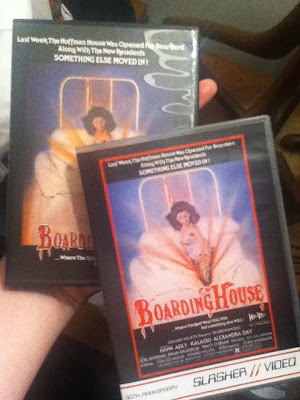 Anytime I am in the presence of a "Bad Movie" conversation. I chime in and say, "Have you ever seen Boardinghouse?"

The answer is always, "No."

Here is my 15 second synopsis to those people:

"It's a movie about a new age telekinetic pimp that sort of looks like the lead singer from Kajagoogoo, but more rockin'. He inherits a house possessed by Horror Vision. He invites a whole gang of babes to come live there via newspaper ad. They party. A Cat gets murdered by a hammer. While showering a chick turns into a pig holding a dead mouse. A dude gets electrocuted by a blow dryer. It's pretty much the best movie of all time."

BOARDINGHOUSE will break your mind.

It's a demonic possession movie/haunted house flick with an early 80's twist. It's either the most clever horror spoof of all time or the most confusing mess of a movie you will ever see. Either way, Boardinghouse is astounding.

Jim Royce (John Wintergate credited as Hank/Hawk Adly. . .) acquires a huge 10 bedroom house from his uncle. He is unaware that a spirit totally murders anyone that tries to live there. . . even though there are many lengthly reports on the deaths that occurred there according to the talking computer that serves as the movie's intro.

What would be the first that a sexy rocker man who gets a huge house would do in 1982? Put an ad in the local paper asking babes to movie in. That's what.

Tons of babes show up and move in to party with Jim. Then they start getting dominated by the Housegeist.

The plot is thin. But like most horror films, it's not the plot itself, it's the way the subpar story is told through the images we see. Whether it's disembowlment, evisceration, decapitation, or a dude in mesh tighty whities on a desk moving a sock with the power of his mind. These are the things that make horror movies worth watching.


Boardinghouse is essentially the sleazy american version of Nobuhiko Ôbayashi's House. Although, I'm not so sure Wintergate was aware House existed. The comparison is simple: Tons of babes in a haunted house getting destroyed in strange ways by a supernatural force.

Boardinghouse features what is refered to as "Horror Vision." and you DON'T need glasses to see it. This is an olde tyme horror movie gimmick brought into the 80's. Before the film begins, a booming voice yells at the audience alerting them that whenever something "shocking" or "disturbing" occurs an image of a gloved hand opening and a certain tone will sound, so the weak of heart can turn away.

It's goofy. It's fun. It's one of the many things that only could happen in Boardinghouse.

Additionally, there's a weird nam vet gardener, quite a bit of 80's T+A, beds that eat people, rockin' jams (by John and Kalassu's band 33 1/3) and plenty of amateur gore effects.

This is the first movie ever made and sold shot entirely on video. Boardinghouse, unlike most shot-on-video (SOV) movies, was actually shot on film and blow up to 35mm for theatrical release. I assume it probably showed at a few drive-ins and was quickly forgotten until it hit video store shelves.

This is one of the most significant events in the Video Store boom of the 1980's. Now anyone with access to a Beta Cam could be a filmmaker and have a movie on store shelves. It happened. Big time.

No one can directly link Boardinghouse with the shot-on-video spike. It's not as if no one would have made a SOV flick eventually, but it should be noted, John Wintergate was indeed the first to take the chance making a movie on an inferior and unacceptable (yet cost effective) format. 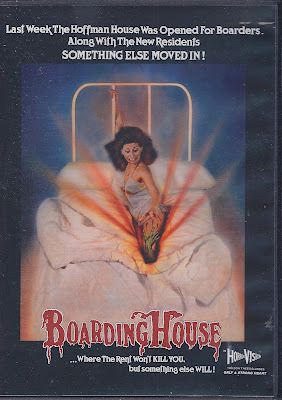 Boardinghouse was first officially brought to Region 1 DVD by Code Red DVD in 2008. Code Red is known for releasing fairly small quantities of their releases. Boardinghouse became one of those DVDs that regularly sell in the $50 range used.

The video quality is deplorable and the audio quality closely resembles shite soup. . . but it's not Code Red's fault. It's because the movie was shot on Beta.

Suprisingly, there are some Special Features on the disc. There is a audio commentary with John Wintergate and Kalassu. Some interview segments with John and Kalassu. It's ok. Serviceable. 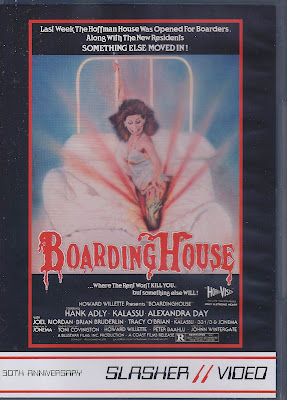 This is probably the best treatment a cult horror film has ever received on DVD (Dawn of the Dead isn't a cult film, GTFO). This dual-layer disc is packed to the absolute max with great content. Including a Two Hour and Forty minute (!) Director's Cut of the film.

There are 18 bulleted features on the back of the box. . . intense.

The video and audio is a big upgrade over the Code Red release as well. In some of the darker scenes, you can now see what's going on. Everything about this release is superior to the Code Red Version.

The artwork is a vast improvement as well. The artwork is reminiscent of the original Paragon Video release. The artwork is also has a reversible "gore" cover with the Housegeist title. The DVD case is also a smoky translucent grey (Xbox 360 Platinum Hits style).

Overall, a beautiful package. In terms of extra features, I would bet my life that there is not another bit of Boardinghouse content available. This DVD is incredible. It's available on Amazon directly from Slasher//Video. Click here to buy this DVD from Slasher//Video.

In the interview segment on this disc John Wintergate describes Code Red's release as "schlocky." It was fantastic when it was the only Region 1 DVD available, but now that Slasher//Video has released the their disc, The Code Red disc does look schlocky in comparison.

A WORD OF WARNING:

While I recommend the Slasher//Video release of Boardinghouse wholeheartedly, the Director's Cut of the film, don't start with it. It is only for those who know what they're getting into. The original version is certainly the "party" version of the movie. The Director's Cut is for the hardcore only. Many strange flashing cuts and awkward video effects. Totally awesome. But I would suggest only the initiated bother with it.

Boardinghouse was the first Shot-on-video movie. It's also a hell of a lot of fun. This is a can't miss flick. If you love "bad" movies or admire low budget horror. It's a must buy.