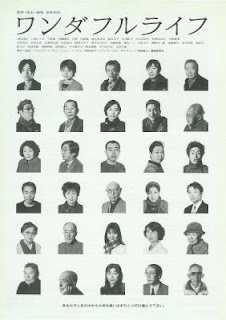 Kore-Eda Hirokazu comes from the tradition of Yasujiro Ozu, Kenji Mizoguchi and Shochiku Studios.  They made small, human dramas that focused mostly on family.  Each one has a gentle, loving nature toward their characters.  However, they also don’t shy away from the angry, bitter world they live in.  Villains and heroes don’t exist, just people.  Every character is getting through their lives as best as they know how, some do it with grace and some bitterly hurt others, but there are no archetypes.

With After Life, Kore-Eda confronts the idea of death through that lens.  The cast of characters in this film is huge, but he approaches each one of them individually.  It starts with two caseworkers discussing last week’s cases.  They are walking through a broken down old building that is a kind of halfway house between life and death.

At the sound of a bell, the recently deceased walk in from the fog and check in at the front desk.  Giving their names, they are asked to go to the waiting room.  Eventually they are called to go to a conference room, where they will meet their caseworker.

In a montage of caseworkers and their cases it is explained, “I’m sure you understand the situation, but I must tell you officially, you died yesterday.  I’m very sorry for your loss.  You’ll be with us for one week.  While you are are here you are welcome to relax, but there is one thing you must do.  From all your years, you must choose one precious memory that you wish to take with you.  Our staff will do their best to recreate it on film.  There is a time limit.  You have three days to decide.  On Saturday, we’ll screen all the memories.  As soon as you have relived the moment we’ve created for you, you will move on, only taking that memory with you.”

Much of the film is presented in an almost documentary fashion, as characters are interviewed by someone off screen.  One man hopes to not remember anything that he has done and considers the loss of memory as truly heaven.  A sweet little woman remembers her time dancing before her brother and friends, so she can have some chicken fried rice.  For another it is simply cherry blossoms falling beautifully from a tree. Others find it much harder to choose that one precious memory.

Through all of Kore-Eda’s films, he gets across his worldview that each person, when they are honest, are truly seeking love and comfort.  And, that there are no inherently bad or good people, only lives spent in regret or with great joy.  For instance, an older man (Tðru Yuri), only wants to talk about sex during his interviews, but then chooses a memory of his grandchildren.  Another man, Taketoshi Naitð, has a difficult time choosing a memory and feels that he only wants to take something with him that has great value.  Upon looking back at his life, he realizes that he mostly ignored his wife and simply talked about doing things of value, but never did them.

This film gets under your skin.  It’s beautifully shot and the interview style makes it feel like a documentary.  But, it’s also an existential invitation to keep you questioning the nature of your own life.  What is the one memory that you would take with you?  What moments do you most treasure?

In the end this film is as much about filmmaking as it is about the afterlife.  Each character meets with the staff and discusses details of their memory, making sure that things are believable.  The staff then builds everything on a set, and gathers actors, etc...  For one character, his memory is flying through the clouds in an airplane.  The crew gets to work building the plane and creating effects that will resemble clouds opening up into the blue sky. But, moreso, it’s about the transporting nature of film.  As the dead view their recreated memories, they are whisked into the next life.  Now, I’m not so sure most people who have seen their lives recreated on film would say that it was a transporting experience, as Hollywood tends to get it wrong.  However, the people here are so delighted by the experience, it’s impossible not to be reminded of the childlike excitement of seeing something amazing on-screen.

The Packaging:
This one is pretty bare bones.  In America, New Yorker Video has put out the DVD and has done a pretty shabby job for such a great film.  The front cover is pretty weird, and I’m not sure who decided that it was a good idea to just have five people stand there, but there it is. Included is both the Japanese and American Trailers, Production Notes, Web Links, and a Director’s Profile.  None of which do you care about or will you look at.  Let’s hope Criterion gets around to putting this out soon, so there is a decent release of it.

Here is a trailer that gives you a sense of the film.  It’s not the American one, as that is embarrassingly bad, but this one is also pretty weak.